Police has solved the blind murder case after it arrested two people involved in the crime in Uri area of Baramulla District, a police statement said.

“On 3/7/2017, Police Station Uri received a phone call that the body of 15 years old Maqsood Ahmad Khanday  son of Mohammad Zameer Khanday a resident of Sikki Madiyan Kamalkote was lying in the pool of blood near LoC in the outskirts of Madiyan village. On this information a police party of Kamlkote reached the spot and took the body in possession. The police party also collected necessary evidence, prepared site plan and recorded the statements of some locals who were present on spot. As per the locals, the deceased was missing from his home since 02/07/2017. Subsequently, the body of deceased was brought to Sub-District Hospital Uri for medico legal formalities and after medico legal formalities was handed over to the legal heirs for last rites,” the statement said. 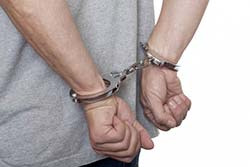 In this regard, a case FIR No 42/2017 under section 302, 34 RPC was registered in Police station Uri and investigation was taken up.

“The investigating team rounded up number of suspected persons of the area for questioning on the bases of collected evidences. After the strenuous efforts put by SDPO Uri, Syed Javid Ahmad, SHO police station Uri Tabraiz Ahmad and its men the case was cracked and two people involved in the crime were arrested. They have been identified as Munir Ahmad Sheikh son of Alif Din Sheikh and Mohammad Rafi Sheikh son of Mohammad Shafi Sheikh both residents of Madiyan Kamalkote. The motive behind the murder has been found to be a prolonged domestic dispute between accused and deceased. Further investigation into the matter is going on,” the statement concluded.