SRINAGAR: Narendra Modi and Imran Khan are caught in interesting situations. Modi is facing a re-election and there is nothing much about the achay din, he had talked about. Khan is in office for almost a month and Pakistan’s achay din would require getting the country out of the economic crisis, first.

Both have difficult tasks at hand. Can Kashmir rescue them both? The way the rival armies, already in an eyeball to eyeball confrontation for decades now, are talking war publicly, is there a possibility of a showdown in coming days? The two neighbours know the importance of being nuclear and Kargil was the last instance where they restricted themselves to a localized conventional confrontation. Neither of them escalated it. Will they do it now?

Unlike Narendra Modi, it goes to the credit of cricketer Pakistan premier Imran Khan of being vocal about peace efforts with India, even during the election campaigning. “If you take one step, we will take two steps forward,” Khan had said in his so-called victory speech. “I say this with the conviction that this will be the most important thing for the subcontinent: both countries to have a friendship.”

Finally, when he took over, he finally wrote a letter to his India counterpart on September 14, 2018, about the significance of managing the “undeniably challenging relationship”.

“We…owe it to our peoples, especially the future generations, to peacefully resolve all outstanding issues, including the Jammu & Kashmir dispute, to bridge differences and achieve a mutually beneficial outcome,” Khan said in his letter. “Siachin [sic] and Sir Creek also need close attention to move towards resolution.”

As the news broke about the New York meeting, the peace constituency across the Redcliff divide was happy over the development. Kashmir was almost excited and it was visible on the newspaper front pages with everybody across the fractured and ideologically split political space of the state supporting the idea.

“Welcome Pakistan Prime Minister Imran Khan’s positive response of resolving issues including Kashmir through constructive & meaningful dialogue,” Mirwaiz Umer Farooq wrote on Twitter. “People of J&K always support every initiative of lasting peace, the whose assured way is through the resolution of the Kashmir Dispute as per universal principles of justice and humanity. Hope Indian Prime Minister Narendra Modi reciprocates the spirit.”

Then two developments took place. On Thursday, the Times of India broke the story about Pakistan postal department’s 20-Kashmir postage stamps. These apparently memorial stamps were issued on various Kashmir individuals and events at a time when the two countries were busy in accusing each other of the violations of human rights at Geneva where the OHCHR yearly session was in progress.

The next day, suspected militants killed three cops – two SPOs and a head constable, after abducting them from their south Kashmir homes.

Earlier on Wednesday, BSF recovered one of its border guards Naresh Kumar dead with bullet wounds and his throat slit open. It happened after the two sides exchanged fire, which otherwise has been a routine.

Almost 25 hours after the meeting was announced, Raveesh Kumar, the spokesman of the External Affairs Ministry announced the cancellation of the meeting. “It is obvious that behind Pakistan’s proposal for talks to make a fresh beginning, evil agenda of Pakistan stands exposed & true face of new Prime Minister of Pakistan has been revealed to the world in his first few months in the office,” Kumar said.

“The latest brutal killings of our security personnel by Pakistan-based entities and the recent release of a series of 20 postage stamps by Pakistan glorifying a terrorist and terrorism confirm that Pakistan will not mend its ways,” Kumar said. “Any conversation with Pakistan in such an environment would be meaningless..In view of the changed situation, there will be no meeting between the foreign ministers of India and Pakistan in New York.”

Pakistan made its disappointment public. “It is unfortunate that India has not given a positive response. Indian has once again wasted an opportunity for peace,” Pakistan Foreign Minister Shah Mohammed Qureshi was quoted by media saying. “It was important to sit and talk for the sake of peace and stability in the region. The refusal of India shows that the Indian government is facing internal pressure.” Qureshi also said that seemingly “India is already preparing for its elections” and has priorities “other than dialogue”. He also said that “a group in the New Delhi that doesn’t want talks to take place”.

“Sad to see India backing off from FM level talks,” Dr Arif Alvi, Pakistan President of Pakistan, tweeted on Friday: “Mutual reservations could have been placed on the table. Kashmiris face only disappointment on the International day of Peace. PM Imran Khan’s outstanding peace overture negated in their usual belligerent manner.”

It was finally the turn of tech-savvy Khan to react personally. “Disappointed at the arrogant and negative response by India to my call for the resumption of the peace dialogue,” Khan wrote on the micro-blogging site, the Twitter. “However, all my life I have come across small men occupying big offices who do not have the vision to see the larger picture.”

With the accusations and counter-accusations, coming from the highest offices, every other person started reacting to it.

“I think our government’s policy has been quite clear and concise,” Army Chief General B P Rawat told reporters in Delhi. “We have made no bones about the fact that talks and terrorism cannot go hand in hand… It’s time to give it back to them in the same coin, not resorting to a similar kind of barbarism.”

The reaction came from Pakistan the next day. “A war takes place when either side is unprepared for it,” DG Inter-Services Public Relations, Major General Asif Ghafoor said. “We are always ready and prepared for war.” Gafoor is the spokesman of the Pakistan armed forces.

Talking to Dunya News, Gafoor said Delhi was trying to divert attention from “graft scandals” like the Rafale deal. “And in [a] bid to divert attention from their domestic issues, Indian Army is hurling irresponsible statements of war,” he was quoted saying. “Pakistan is a nuclear power and our desire for peace should not be misconstrued as our weakness.”

“War is never a solution to any problem,” Gafoor told Geo News later. “It’s India who backs out from the dialogue. For peace, the dialogue is the best course. This we always offer from a position of strength, not weakness.”

Now more and more people from the two sides have joined the ‘virtual’ jingoism using the social websites. Media is apparently playing the second fiddle.

Quite a few people understand the “undiplomatic” language that the two sides are using. While India named Imran Khan and said his ‘true face exposed’, the Khan personally took to twitter saying “small men occupying big offices”. This was never the case of diplomacy that two countries transacted while handling Kashmir, one of the oldest issues on UN agenda.

Analysts in India and abroad do believe that Modi led BJP government may ill-afford talks with Pakistan. It is facing an election, at a time, when most of the initiatives have literally boomeranged. The inflation is all time high, petrol process are unable to stop anywhere, currency is shedding value, the right-wing activists are leading a minority-specific terror and, more recently, the allegations that it was government’s keenness to have a third party – read Reliance Industries – in the 2016 Rafale jet deal with France.

While a peace effort with Pakistan could have been a better idea to go about, the party has invested massively in the hate-Pakistan campaign. It may not be easy for the party to take a U-turn at the time of the polls. In this situation war may benefit the incumbent regime better than peace efforts, some pessimists think.

The possibility of a war is not a very good option for either of the two sides. The cold war, however, will continue. It will be reinforced by more verbal battles, later this month, in New York where the representatives of the two countries will speak to the UN General assembly. They are already in a logjam over an earlier OHCHR report on Kashmir in the ongoing United National Human Rights Council sessions, currently underway in Geneva.

But in both the scenarios, Kashmir will continue to suffer. The situation in Kashmir is directly linked to the relationship India and Pakistan will have. The more escalation means more tensions on borders and the hinterland.

The talks news had triggered some sort of positivity in the political space of Kashmir. With the cancellation announcement 25 hours later, the routine gloom has taken over.

These tensions have a seriously ripening atmosphere available. Kashmir is ruled directly by Delhi after BJP pulled out of the BJPDP alliance. Now governor Satya Pal Malik is ruling the state. The government is so keen to have local body polls, started early October. These will be followed by the Panchayat polls across the state.

National Conference, Peoples Democratic Party and the CPI (M) have announced to stay away from the exercise. Delhi insistence on polls, sidestepping the suggestions by NC and PDP, has impacted the credibility of the two parties as well. Congress and BJP are more than willing to contest thus it has a direct cost to the Kashmir centric political edifice.

The elections are being held at a time when the security situation is highly critical. A campaign against the local policemen has added to the tensions, that many think it has the potential for a civil war.

The India Pakistan animosity or a cold war will add to this serious crisis already prevailing on ground. Even if the two countries do not fight a war – which they obviously will not, Kashmir sees no exit from the ‘war’ it is already caught in and sucked by, for three decades now. 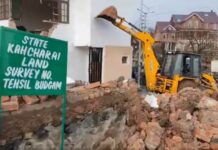 What Administration Must Keep In Mind While Reclaiming State Land?

Why Rahul’s Yatra Had Little Meaning For Kashmir?