SRINAGAR: Kaneez Fatima is Ladakh’s second woman pilot. She is 24. Soon after she completed her training, Air India hired her. Ladakh’s first Muslim pilot is Hina Masood who is already working with Air India.

The rise of Kaneez Fatima from the arid desert region of Kashmir is a fascinating story.

A resident of a Leh locality near the Polo Ground, Kaneez’s parents got separated when she was very young. She was brought up by her mother Shakeela Banoo, a nurse in the state-run Leh hospital.

They are two sisters. Nahida Ibrahim, 28, the elder one, who is an engineer working for the Hindustan Aeronautics Ltd (HAL) and is posted in Bangalore. She studied engineering in Srinagar and was appointed by the HAL, a government-owned company that is into the manufacturer of choppers and light aircraft. Kaneez is the younger one who finally made it to the skies.

Abdul Majid, a relative of Kaneez said that the family has struggled a lot to make things happen. With the active support of her grandparents – Haji Fatima Banu and late Ghulam Rasool, their nurse mother worked hard to ensure her daughter pursue the careers they choose for themselves. “She lifted a huge amount of loan from a bank for the same,” Majid said. “The entire amount lifted from the bank as a loan was spent on Kaneez and it will take her mother some more time to liquidate that.”

Kaneez was enrolled in the local Imamia School at Leh. From the basics, she studied there till her middles. Later, her mother shifted Kaneez to Srinagar where she was enrolled in the Government Higher Secondary School, Kothibagh. Her mother had managed her posting in Srinagar to take care of her. It was in Srinagar that she lifted the loan after Kaneez made her career choice. She moved back to Leh, after a long tenure in Srinagar, only last month.

Early 2013, the family got her admission in Government Aviation Training Institute at Bhubaneswar (Orissa). Her mother spent a fortune to get her daughter trained as a pilot. Kaneez spent almost six years for training and the subsequent flying experience, mandatory for the job.

“Like Kaneez, we are getting another Muslim woman pilot, next summer,” Majid said. “She is the daughter of my friend Ghulam Sultan, a contractor.”

With these two women pilots, Kashmir is now gradually getting a good group of women who fly the aircraft. Captain Tanvi Raina, Ayesha Aziz and Iram Habib are the recent entrants to the exclusive high-flying club. 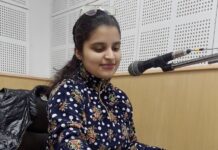