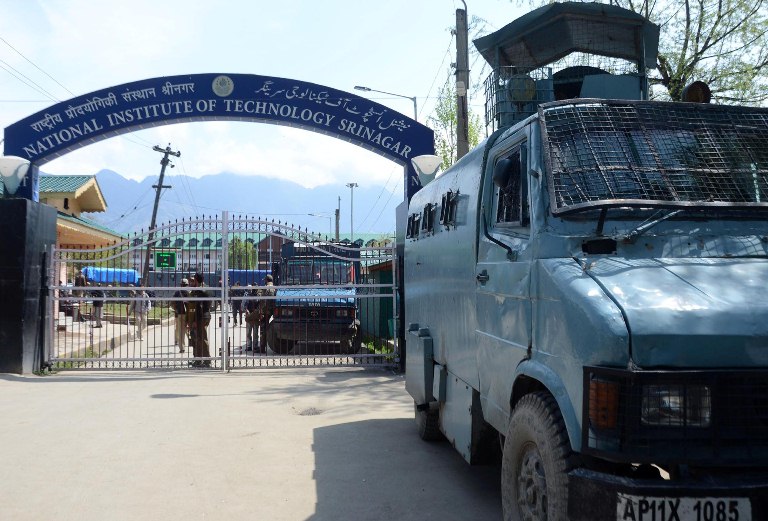 Mumbai based newspaper DNA has exposed the double game that BJP is playing in Kashmir. While Deputy Chief Minister Dr Nirmal Singh said termed the NIT Chalo campaign as “rumours”, his party has cleverly flagged off a yatra from Delhi. Besides, its two foot soldiers Anupam Kher and Ashok Pandita have already landed in Srinagar to coincide with the arrival of the yatra.

Ms Rohinee Singh of DNA has done a detailed copy on this subject. It is being reproduced here:

“At a time when the PDP-BJP government in Jammu and Kashmir was trying to douse fires at the National Institute of Technology (NIT), Srinagar, elsewhere in the country, the BJP was milking the issue to keep the heat on the debate over nationalism and patriotism.

In the national capital, BJP national secretary RP Singh flagged off a ‘Tiranga March’ to express solidarity with the non-Kashmiri students of NIT, who were beaten up and denied permission to march out of their campus to unfurl the Tricolour on Srinagar’s Hazratbal street.

The march, organised by the Bhagat Singh Kranti Sena (BSKS), but backed by the Delhi BJP, will reach Srinagar on Sunday. From there, it will proceed to the NIT campus, probably exacerbating the murky situation for the PDP-BJP coalition in Srinagar.

In a clever strategy to circumvent the blame of running against its own government in Srinagar, the BJP has brought in the Delhi Sikh Gurudwara Management Committee (DSGMC) to own up the march. The DSGMC is currently being managed by the Akali Dal-BJP combine.

At least 100 people from 12 states started off from Delhi on Saturday morning to reach Jammu in the night. “Some 400 people from Jammu and Punjab are likely to join us. We are going to express our solidarity with the non-Kashmiri students at NIT. We are going there to give them the national flag,” said Tajender Singh Bagga of the BSKS.

Bagga, in the past, had been in the news for allegedly attacking lawyer Prashant Bhushan in 2014, over his demand for a referendum on the presence of Indian Army in Srinagar. Bagga is one of the staunch supporters of Prime Minister Narendra Modi on social media.

Shilpi Tiwari, a former aide of human resource development minister Smriti Irani, is also steering the march with Bagga. The two had started a campaign on Facebook and WhatsApp.

Disassociating itself from any political grouping, Tiwari said it was a social media endeavour and that they had neither approached the gurudwara nor the BJP. “We did not approach RP Singh. He probably became a part of it because he felt for it,” she says.

Singh, however, confirmed that he was approached by Tiwari and that he participated in his individual capacity and not as a BJP representative. “We are not backing the march. The crisis is being handled by the state government. I went there because I felt for the flag. My presence has nothing to do with my party,” he said.

Like the BJP representative, DSGMC too is not willing to openly associate itself with the event and say that gurudwaras are open for all. “The group approached us because they wanted to seek the blessings of the Guru before starting off. We welcome everyone,” said the committee’s spokesperson.

One bus and eight cars started off from Delhi after their morning langar at Gurudwara Rakabganj. The group is being hosted by the gurudwara committees along their way. At Srinagar, it is the gurudwara trust that is organising for their logistics and food.

Other than people from Delhi and adjoining regions, youth from West Bengal, Gujarat, Odisha and Uttar Pradesh are participating.

Sanjukta, the only woman participant to join the march from Delhi, came all the way from Kolkata. The 29-year-old felt that NIT students were victimised. Even while her family did not approve of her decision, she chose to take four days’ off from work to join the march. “I have been following the whole NIT episode very closely. I am going there to extend my support,” she said.

Like Sanjukta, Harshal Purohit has travelled from Ahmedabad, leaving his wife and a 7-month-old daughter behind. “I feel for the Tricolour. Kashmir is a part of India and nobody should be stopped from hoisting the national flag there,” he said.”