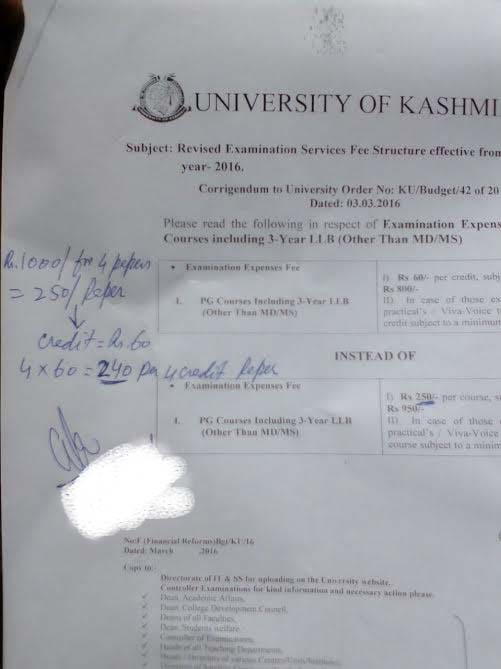 Kashmir University on Tuesday said that it has rolled back it “fee hike” order.

“There will be a formal order by this evening uploaded on KU website,” he said. “The new comers will pay fee according to earlier norms set by varsity.”

Meanwhile, officials of the varsity today said that the varsity was following the University Grants Commission guidelines.

Speaking to Kashmir Life, Dean Students Welfare, Prof Fayaz Ahmad said, “this year as Choice Based Credit System (CBCS) was implemented from this academic session, so we had to revise the fee structure.”

He said that till 2015 academic session, a student paid Rs 1000 for his/her examination. “But with the introduction of CBCS, courses got divided,” he said, “now a student has to achieve a target of at least 24 credits.”

Prof Fayaz further said that following the “misconception” among the student fraternity, the VC has constituted a committee which will look into the matter.

“Yesterday, we had a meeting with Class Representatives (CRs) who got convinced that there was nothing like fee hike,” Prof Fayaz claimed, “CRs are attending the classes normally.”

Prof Fayaz informed, “now a student is supposed to pay Rs 60 per credit which means a student will pay at least Rs 1440 (24 credits @Rs 60) for his/her examination now.”

“Till now, a student paid Rs 250 per paper but now a student will pay according to number of his/her credits,” he said.

Post Script: While Dean Students Welfare was giving details, KU Provost rang up Kashmir Life saying that the order with regard to “Fee Hike” has been put on hold and new students will pay fee according to old norms.