On the death anniversary of the prominent editor, orator, and politician, Shamim Ahmad Shamim, kindly read a lecture that former government officer and a prolific writer, Zahid G Muhammad delivered on May 16, 2005, at a special memory function in Hotel Broadway in presence of Dr Khaliq Anjum, Ved Bhasin, Qurrat ul Aian and a hall jam-packed with Shamim’s friends and well-wishers

I watched Shamim from a distance but I had a strong feeling that an intellectual that Kashmir had waited for long had arrived. 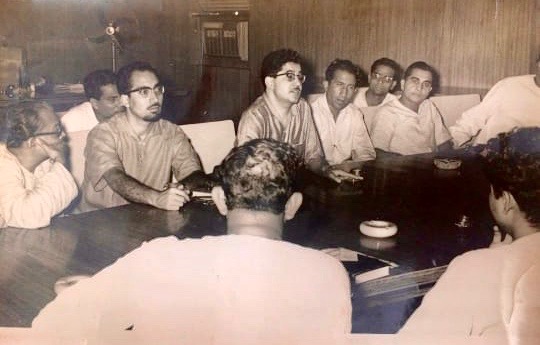 Shamim A Shamim addressing a cultural delegation. Photo Courtesy: Qurrat Ul AinIn this galaxy of intellectuals, I am a dwarf. Notwithstanding being a dwarf, I feel taller for talking about one of the tallest Kashmiris. I feel highly delighted and excited. Elated for having been allowed to talk about a great son of the soil and excited for sharing my views in this august gathering about a person about whom I have always thought that he was to Urdu journalism what Keats was to English poetry.

I have no claim to be Shamim Ahmed Shamim’s friend. I can’t claim to have rubbed shoulders with him or exchanged my thoughts and ideas with him.

Shamim was like a taper that attracted young lovers from far and wide. He also had his quota of adversaries and enemies. All intelligent and upright men have them. For being more intelligent, he had more enemies. His intellect was his enemy. The majority of his adversaries were either envious of him or turned against him for fear of his piercing nib. The nib that pierced deep into ‘rhinoceroses-hide of the political establishment’ and touched its sensitive nerves, thus making them uneasy.

Unlike many others in this gathering who have seen him in various hues and shades, my position is different. My association with Shamim is of a child who watches a monument dominating the skyline and is wonderstruck from a distance.

Nowhatta, my birthplace, has been an epicentre of politics. In the sixties and the seventies of the past century, these shop foyers were the hub of politics, mostly pro-right to self-determination. They were not places of gossip but real political schools. Yes, there were a couple of these penji were communists gathered. I remember most Communists, including those who made it to top echelons in politics and power after launching Democratic National Conference, gathered at a wan in our locality. The shop owner, semi-literate, chain smoker but an ardent communist, talked about Marx and Lenin to young children and students in his shop and converted them to his fold. There were many other wani-penjis where discussions revolved around the politics and programmes of the Plebiscite Front, Bakshi Ghulam Mohammad’s carrot and stick policy, where every word of Zarbi-Kaleem and Mant Dab programmes of the “Azad” Kashmir was discussed and debated upon.

Many a time, the discussions in these shops were so scholastic and erudite that they would humble modern-day scholars in our university, which my teacher Dr Want called as “goody goody” school. The discussion in these shops would range from Ibni Khalduin to Jean Paul Sartre.

In fact, in one of these shops, I first heard Shamim Ahmed Shamim’s name, an emerging voice for modern Kashmir, a voice against political hooliganism and opportunism. Shamim was a strong voice against moral and political corruption that had destroyed the socio-cultural ethos of the land for many years in the fifties and sixties.

I do not know much about the political and literary scene as obtained those days in the up-town Srinagar that is now called as civil lines, but in the downtown, the political scene was full of vivacity and vibrancy- many had no love for Shamim for his pro-India politics.

As I remember, apart from some prominent local newspapers like the daily Hamdard, edited by Ghulam Rasool Aarif and the Daily Aftab edited by Sanaullah Bhat a Banglore weekly Nashemian was very popular those days in Srinagar.

I do not know why but the moment Shamim brought out weekly Aiana, it caught the imagination of people. The magic of Aina was so immense that it almost hypnotized its readers. It made a reader look at life in general and politics in particular, the Shamim way. I remember after a few issues of this paper coming to our home, it became a family addiction. Except for my mother, who could neither read nor write, everyone in the family waited for his turn for reading this paper and many times there was a scramble.

Besides, the pages of Aiana, it was Dr Wahid, a friend who inscribed a larger-than-life image of Shamim Ahmed Shamim as an orator and journalists on my mind. Dr Wahid was so imbued with Shamim’s writings and personality that many a time he would enter into a very hot argument with my uncle who was a traditional supporter of the Mirwaiz family, a bakara. I think it was the bakara ki Paichain that had enraged him more. Shameem caricatures of political personalities are masterpieces of literature. While I talk to you, frame after frame many of his writings, which I have read and re-read move before my eyes and every word looks animated.

To see how gems of wisdom and pearls of wit cascaded from his mouth, Dr Wahid one day suggested to me that I should visit India Coffee House in the morning. Notwithstanding the typical downtown premonitions that the India Coffee House was a den of intrigues, wherefrom lies against our leaders were manufactured and spread. It was not as a club of elite or intellectuals but of pro-establishment propagandists- a centre to denigrate the popular sentiment. I started visiting India Coffee House on daily basis in the morning.

The scene at Coffee House is rolling before my eyes at this moment also. I believe it would be rolling before the eyes of many others in this hall. Handsome, bespectacled Shamim, neatly dressed sometimes in the starkly white shirt was the star attraction. True to his name he was like a flower brimming with scent with many butterflies of all colours and shades hovering around him. Sitting in the middle of the table with all others around listening to him with rapt attention, some with wide-open eyes, some with blank faces, some getting damsel blushes with his pungent remarks, he looked like a guru and all others as his chealas. I loved to listen to him but never dared to poke myself in the discussions.

And every day I left the Coffee House with borrowed wit, and later on, imposed it on my fellow students and friends and like others who basked in his reflected glory called themselves as shahsawars of Kashmir literature.

I always made an abortive attempt to get the attention of this great journalist and orator but failed. But one day, it happened I succeeded in catching his attention. Sheikh (Sheikh Muhammad Abdullah) had been taken seriously ill – true or feigned I do not know.

Those days, I had started writing in newspapers, my one or two articles had appeared in the Statesman perhaps by fluke. Sheikh Abdullah’s illness was a cause of concern not for the National Conference but for millions of his supporters. I wrote an article in the Radiance, Delhi that was published with the title Kashmir: After Sheikh Abdullah. (July 13, 1977).

Despite this newspaper being under the influence of Jammat-e-Islami Hind, it was read by a good section of Kashmiris. Perhaps it then represented Indian Muslim’s point of view. Shamim Sahib had read my small write-up. He called me in Coffee House and with an intriguing simile said to me that I had touched a good subject but had addressed the issue with puerility. Today, I feel yes it was puerile as I had tried to be prophetic and in journalism, one could not be prophetic.

As I remember in this article, I had written when Sheikh Sahib will depart from this world, the slogan for the right to self-determination will be reborn and the “only leader or wahid leader and only party” that Shamim believed was a fascist approach will die and the concept of collective leadership and the multi-party system will be born. In this article more out of naivety than maturity I had seen future leadership for Kashmir in Shamim, (Abdul Gani) Lone, (Syed Ali) Geelani, and (Abdul Rashid) Kabali.

After some time Shamim Sahib wrote on the same subject in the Onlooker Bombay, After Sheikh Who?

By then I too had started writing for Onlooker, Bombay. I think Qurat Ji has incorporated that article in this latest publication. On reading this article, I felt dwarfed. His treatment of the subjective was not highly analytical but pregnant with a lot of politics that unfolded in the later years.

After the Janta Party lost the election in 1977, I wrote an article on the causes of the debacle of the Janta Party in Kashmir in the Onlooker, Bombay. I looked at the issue from a parochial point of view. Shamim Sahib’s article had appeared in the same issue of the Onlooker titled as Third rate politicians of the fourth rate people, it was an autopsy of the Janta Party and he had very vividly drawn up the inherent contradiction in the Janata bandwagon and whose it was going to crumble. Shamim had started writing for national magazines like the Sunday and the Onlooker and held a promise of emerging as shinning on the firmament of the media scene at the national level.

Shamim Sahib was not just a journalist or a parliamentarian but he was a politician apart. He was emancipated and had a vision not for Kashmir only but for the entire sub-continent. He was one of the most intelligent politicians of Kashmir.

I watched Shamim from a distance but I had a strong feeling that an intellectual that Kashmir had waited for long had arrived. I had a strong belief that Kashmir politics had suffered for lack of intellectual content, it suffered some kind of political waywardness that I believe has been the reason for the political uncertainty that has been gnawing over society for more than past five and half decades and that has been raison d’etre for the vast martyrs gravesites dotted entire state. True, the struggle against feudal rule had great intellectual content but it was not indigenous.

I had looked at Shamim as an intellectual who was born to give a new direction to Kashmir politics but death snatched him from us. May God Bless his soul- Ameen

Shamim will be reborn in Kashmir, by his writing, which have been compiled by Qurrat Ul Aian, has immortalized him.

I had suggested last time at a seminar that there needs to be a chair in the Department of Mass Communication that would be dedicated to research in the field of journalism, at that time, I had suggested the name of Mohammad Din Fauq, I wrote a personal letter to Vice-Chancellor on this account. If there was some difficulty establishing a Mohammad Din Fauq chair, there should be no difficulty installing a Shamim Ahmed Shamim Chair at the University of Kashmir.

(The long piece was reproduced with the author’s kind permission from his book, The Icons of Kashir Identity that was published in 2007)