SRINAGAR: Seen as a face of Kashmir separatism for over three decades, as Syed Ali Geelani parted ways from Hurriyat Conference (g), the amalgam he was heading, it was a surprise. In his parting letter, there is no word about the status of his association with Tehreek-i-Hurriyat, the party he floated after parting ways with Jamaat-e-Islami. Indisposed for a long time, Geelani is confined to his Hyderpora residence for a long time now.

Stating indiscipline, lack of commitment and corruption by many members of the amalgam as reasons, his decision to divest from Hurriyat which he led for over 15 years came on Monday. “I have decided to distance myself from the Hurriyat given the current situation [in the amalgamate],” he said in a voice note. He further said that all the constituents of his faction of the Hurriyat had been informed, in a detailed letter, about the decision. 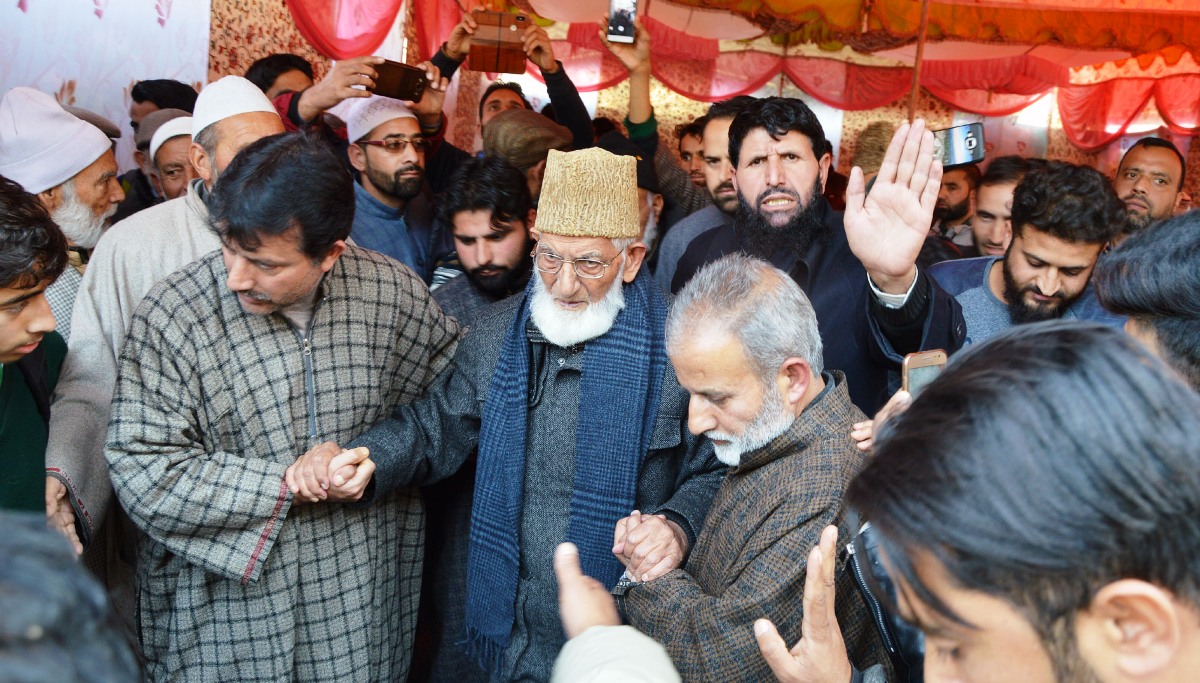 In a two-page letter dated June 28, Geelani accused the Muzaffarabad based separatist leadership of “nepotism, participation in the state apparatus, internal rivalry, and corruption, besides indulging youth in drug mafia.” Without naming anyone, he also accused constituents of the Hurriyat of inaction after scrapping of Article 370. “I sent messages to you (Hurriyat leaders) through various means so the next course of action could be decided but all my efforts were in vain. Now that the sword of accountability is hanging over your heads for the financial and other irregularities, you thought of calling the advisory committee meeting despite persecution and pandemic,” he wrote.

In his letter, he accused his constituents of insubordination. “You also supported the unconstitutional decisions of your representatives (based in Pakistan) and rallied together in this regard.”

The letter written by Geelani said he can’t take responsibility for the “errors” of his associates. “It is beyond my capacity to be answerable to the faults and errors of my colleagues besides my own. You are free to take a decision for yourself,” he said. “In view of the present circumstances after pondering over the entire issue, I have decided to dissociate from the Hurriyat Conference,” he said.

He, however, stated that Abdullah Gillani, also based in Pakistan, will continue to represent him in Pakistan administered Kashmir and all other international forums.

Known for his hardline ideology, Geelani in the letter accused Hurriyat constituents of hatching “conspiracy and resorting to lies against him” and also teaming up with the Hurriyat chapter in Pakistan administered Kashmir, which had targeted him. “Instead of reprimanding them, you called a meeting in Srinagar and ratified their stand. You people have become part of the conspiracy and lies,” the letter reads.

He, however, said there is no weakness in his soul, sentiment or his commitment despite his old age, physical weakness and various ailments.

Geelani, known as hawk even among separatists, owes his identity to his “defiance’ and ‘No’. He has served as a member of Jammu and Kashmir assembly twice before putting in his papers in late 1989. He was soon arrested and freed in 1993 following which the Hurriyat Conference was constituted.

Reacting to the resignation, BJP national general secretary Ram Madhav tweeted multiple times including the audio clip and letter regarding Geelani’s disassociation. “This man was singularly responsible for ruining the lives of thousands of Kashmiri youths n families; for pushing Valley into terror n violence. Now resigns from Hurriyat without giving a reason. Does it absolve him of all d past sins?” he wrote in one of his tweets.

National vice president and spokesperson of BJP Baijayant Panda has opined that this is linked to the abrogation of Article 370, others have called for justice, stating that Geelani “must pay for his sins”.

BJP IT Cell Chief, Amit Malviya opined that “he must pay for his sins”, adding that he had “destroyed” Kashmir. “Syed Shah Geelani, the man who destroyed Kashmir, used innocent Kashmiris as canon fodder to further Pakistan’s agenda, announces resignation from the Hurriyat. It is nothing but acceptance of his irrelevance after Modi administration abrogated 370!” Malviya tweeted.

Former DGP of J&K, S P Vaid said Geelani was “aaka of separatism”. “The Akka of separatism, motivator of terrorists & Pakistan ISI’S point man in valley resigns from Hurriyat,” he wrote in one tweet.

In his another tweet, Vaid sharing his in-service incident wrote, “On 23rd March ’99 as DIG Baramulla when I was seriously injured in a terror attack, me & my family were left to fend for ourselves for treatment in Delhi, while anti-national SAS Geelani was flown in State Govt plane to Mumbai for his personal treatment. Was it fair?”

Talking to media, Vaid said “They (separatists) are demoralized lot. This is indication of the right winds blowing in Kashmir. I see good times ahead. With people like Geelani resigning, pro-India voices will have much better say.”

A proponent of the merger of J&K with Pakistan, Geelani was the life-time chief of the Hurriyat he resigned from. Known as Hurriyat (G), this faction was floated after he decided to split the Hurriyat in 2003 after accusing some of its constituents of fielding proxy candidates in the assembly elections. The other faction, known as Hurriyat (M) is headed by Mirwaiz Umar Farooq.

Earlier, Ashraf Sehrai, a long-time lieutenant of Geelani from his Jamaat-e-Islami days, was appointed as chairman of TeH in March 2018.