Opening the Jhelum Valley Road (JVR) connecting Srinagar with Muzaffarabad, the Pakistani administered Kashmir (PaK) capital in April 2005 was a path-breaking initiative between India and Pakistan on Kashmir front.  A Kashmir Life report.

It started with a fortnightly bus service that was later made into a weekly affair. It is now travelling twice a week. There is another bus gong from Poonch and people, seasonally, cross a small culvert in Teetwal to get into the Neelum Valley, as well.

The trans-LoC travel is permitted for families that are divided by the partition of 1947-48 and later by the wars that India and Pakistan fought in 1965 and 1971. Though the families across the political divide continued getting divided later as well, especially after 1990, the trans-LoC mechanism does not apparently accommodate that demographic upheaval. Though the last round of talks between the foreign ministers of India and Pakistan in July 2011 did suggest the two sides will be expanding the scope of trans-LoC travel to pilgrims and tourists, it is yet to happen.

The systems in vogue for permission continue to be laborious. Applicants are first verified by J&K Police and once they are sure of their antecedents, the requests are made to the other side. PaK administration later starts its own process of verification to check the hosts and after getting certified, the permits are issued in Srinagar. There have been huge demands for un-complicating the processes so that people having state subject certificates are permitted to cross. The two countries had decided to ensure a permit is granted within three fortnights. But it is yet to happen.

Though there has not been any change in the processes associated with granting of permission to the visitors from either side, the pendency has not been very huge. By the end of 2011, the government in Jammu revealed the police had 564 applications from the J&K residents and 1869 requests from PaK at various stages of verification.

Delayed verifications have created it’s own records. There were, at least, two incidents in which mothers were prevented from taking their suckling babies to the other side for want of permits. This happened because the babies were not even conceived when their mothers moved applications for a permit!

But the show goes on. In last seven years, the facility was used by 18601 individuals – 11410 from PaK individuals and 7201 J&K residents. J&K is hosting more guests than it actually sends to PaK. All these people belong to divided families. Here are the actual details for every route that was announced open since 2005.

After the October 2005 earthquake flattened vast stretches on either side of the LoC, New Delhi announced opening four more points on humanitarian grounds for relief. The Haji Pir crossing was the first one to open. The two sides actually opened it for symbolic relief exchanges on November 16, 2005, when India sent Canadian first aid boxes and Pakistanis Saudi relief packets. The day witnessed photo-ops and ceremonial hugs between Lt Col Basit Irfan and Col Gyan Misra, army PROs Lt Col Batra and Major Ali Bukhari and finally the civilian officials at the end of a mule track between Silikote, Tulwari and the no-mans land.

Located in Uri, this route would not only connect a lot of population on either side but revive a road that existed till 1965. Given the massive minefields and eroded alignment of a road because of 58 years of disuse, the two armies decided to open it after a road is laid. Its opening would connect Silikote (Uri, J&K) with Khawaja Bandi (PaK) which is part of the 46-Kms road of early 1940’s connecting Uri with Poonch through the strategic 9000-feet Haji Pir Pass that was operational till late 1947 and later for a few months after 1965 war. The entire stretch was part of the Uri tehsil before LoC came into being.

This highly strategic pass 22 Kms south of Uri witnessed intense fighting since 1947. Indian Army could not get its control in 1947-48 but they wrested it from Pakistan on August 28, 1965. It enabled restoration of traffic between Poonch and Uri but Tashkent Agreement enforced a status quo ante and the Pass was taken back by Pakistan in February 1966. An attempt to seize it in 1971 failed.

On November 19, 2005 the second of these points was opened at Teetwal. In fact, a week ahead on November 12, 2005, there was some symbolic relief exchange when Colonel J Nair of 12-Kumaon and Lt Col Shahid from Pakistani army had a symbolic hug on the 175-feet foot-suspension bridge over the roaring Kishanganga (Neelum) that separates Teetwal (Karnah) from Chaliyani (Neelum Valley). The “relief” was taken by distinctly uniformed porters from the two sides.

This was the first time in history when the area witnessed the rebuilding of a bridge that the region lost in 1948. The main pre-partition bridge was around half a kilometer upstream from the suspension bridge that Pakistani army laid. A week later 24 J&K residents crossed over. Nobody from the other side cross into J&K.

This bridge continues to be one crossing point. But it is seasonal. Duly authorized locals use this rope bridge to cross. So far 1343 people – 856 from J&K and 487 from PaK, have used this window to crossover.

This crossing was opened in 2005 when Congress president Mrs Sonia Gandhi accompanied defence minister to Balnoi in Poonch on November 28, 2005. Connecting Mendhar (Poonch) and – Mirpur (PaK), this road was operational till 1948. Rohsni is the last military post on this side which is around 26 Kms from the border Mendhar township. It faces the Kana post of Pakistan. There is a four kilometers distance between Mankote (the last village on this side) and Sera, the one on the other side. Before the formal opening, Indian army had to lay over 2.50 Kms of road to ensure the truck to the last post, the other side had to repair and renovate more than 800 meters to gets its vehicles closer. When the road was opened, five guests from PaK were received because there was nobody from J&K authorized to cross over that day.

Interestingly, however, within six months after, it was closed on June 26, 2006 after a major portion of the border road was washed away by incessant rains. By then 134 residents from J&K and 129 from PoK had used it. Residents said that while the government has constructed a major bridge and re-laid the road that was lost to floods, authorities are not so keen to open it.

In the summer next year, another major crossing point was thrown open at Chakan da Bagh in Poonch on June 20, 2006 by Congress president Mrs Sonia Gandhi. After seven years, it is this opening that is the most successful as 52.73 percent of the total visitors (9810) from either side preferred this route over all others. This probably is because the erstwhile Poonch Jagir, that mothered the conflicts of 1947 in J&K, was sliced between two by the partition. While J&K Poonch was divided into Poonch and Rajouri districts, the PaK Poonch was divided into Rawlakote and Sudhnuti districts. This essentially means that all these four districts have the highest number of divided families. Post partition, some of them have changed their faith but continue to be blood relations. Together they constitute around two million population scattered over 5728 square kilometers.

This 47-kms road connects Poonch with Rawlakot (10 Kms in J&K and 37 Kms in PaK). Chakan de Bagh, the last point on this side of the LoC is barely 10 Kms kilometers from Poonch. It faces Tetrenot post and village on the other side. 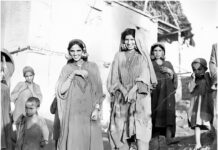 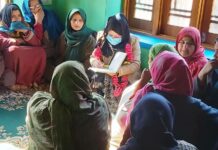 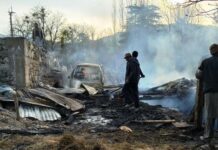 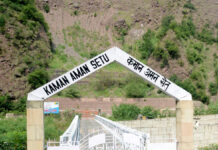 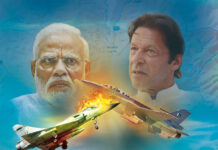 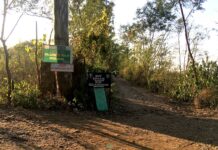