Seasonal blues and scant rainfall this year dealt a severe blow to the apple farmers of south Kashmir’s Shopian belt. With poor infrastructure in place and new trends of packaging and distribution hitting the market, local farmers and traders feel like an ignored lot, Bilal Handoo reports. 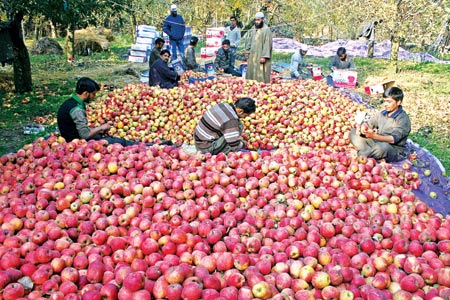 Built over nearly 30 kanals of land in south Kashmir, Shopian Fruit Mandi is abuzz with trade activity these days. Huge trucks, empty and loaded with apple boxes, choke the market although the season of apple harvest is almost drawing to a close. In the middle of September, apples grown in orchards across south Kashmir are transported to the Shopian Mandi where traders from across the country purchase the produce.

This year, due to a bad summer season, Shopian’s apple production was low which has affected the trade. But that hasn’t stopped the buyers from various states of India to gather in Shopian and buy the produce from nearly 600 fruit stalls erected by farmers and local fruit traders. There is a feverish trade pitch which has created a chaos. As the day begins and farmers and traders swell in numbers, the demand for apples soars.

Around 1,375,100 fruit boxes valued at around Rs 84.5 crore were sold at the market during 2011-2012. “Till Oct 31 this year, 1,983,260 boxes valued at more than Rs 102 crore were sold here,” M Y Shah, assistant grading and marketing officer of the Planning and Marketing wing of Horticulture Department, Shopian, said. Shah works from his office located besides the Fruit Mandi and a large part of his duty is to ensure smooth conduct of trade.

If insiders in the market are to be believed, business worth Rs 537 crores has already taken place at Shopian Fruit Mandi since September this year. But it doesn’t find mention in the official records “Last year, the market recorded Rs 700 crores business which is only going to get better this time since market will remain open till mid January next year,” Shopian Fruit Market president, Mir Mohammad Amin, said.

It is the third year in a row that the famous ‘Delicious’ Apple cultivated in Shopian registered minimal presence in the market. Due to fluctuating weather conditions this year, many apple growers were left upset by the fall in production. “Horticulture department has to share the blame as they never created awareness among the growers about the use of right fertilizers and pesticides at right time,” Rafiq Salroo, whose apple orchard yielded scanty harvest this year, said.
The apple orchards of Shopian might have disappointed the traders but apples from adjoining districts like Pulwama, Kulgam and Anantnag have drawn traders from many states of India to the Mandi. “Last year, 40 non-local traders visited the market to purchase apples. This year, 50 odd traders have already visited us. Local agents who purchased apples on behalf of Indian traders were exempted from count as their number runs in thousands,” Farooz Malik, a marketing inspector of horticulture department said.

At one of the stalls, Mohammad Rashid, a trader from central Indian state of Bihar was loading a truck with apple boxes. He had visited the Shopian fruit market for the first time, “Till last year, I used to buy apples in Delhi market. High prices, mediocre quality and limited options made me visit here. I can sense the difference in produce here,” he said. Like Rashid, many non-local buyers had come to Shopian especially to purchase the famous ‘Delicious’ apples. “Shopian’s Delicious apple is in great demand due to its taste value. It is simply a brand,” a group of buyers from Kerala who were disappointed with the drop in production of Shopian apples this year, told Kashmir Life.

One of the most peculiar scenes in the market is the manner in which the traders purchase fruits. A buyer visits the stalls where apple boxes are put up for auction. As the prospective buyer shakes hands with the trader, a handkerchief is put over the hands, “The buyer then strokes the seller’s hand in a particular manner which is decoded by the seller. If the seller is satisfied with the price offered, the deal is made. Otherwise the process continues till the seller gets the desired price,” Gulzar Hussain, a stall owner at the Mandi said.

The rate of apples is same as it was last year when a single, good quality box of ‘Delicious’ apples cost around Rs 1000. “This year, the rates have remained same but the average rates slumped from Rs 720 to 685 due to a mere 20 percent apple production in Shopian,” said marketing inspector Malik.