As sections of youth try to standardize stone pelting as the new mode of communication, law enforcing agencies slide in the old era to rediscover the utility of catapults, hunter guns and pepper. Wasim Khalid and Sameer Yasir visited the actors of Kashmir’s new ‘stone age’ to assess the “lethality” of the non-lethal era. 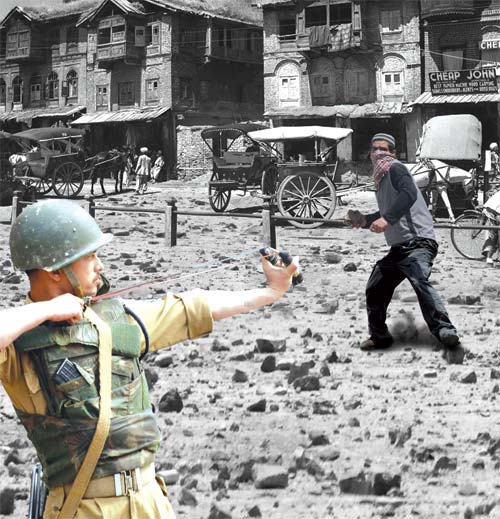 A picture showing the naked back of a youth peppered with innumerable, nail-sized prick-holes evoked expressions of shock and dismay from people on social networking sites. In the ensuing debate, questions were raised whether pellets were lethal or non-lethal armory used by the police and paramilitary forces against the protestors in Kashmir valley.

The shocking picture was of a youth in north Kashmir’s Baramulla town. The victim was hit by a rain of pellets fired by troops during a demonstration against the killing of a local youth by Army on March, 5. The boy somehow survived to tell his tale. Or perhaps he was lucky that the pellets didn’t hit any of the delicate organs of his body like heat, chest or eyes which could have proved lethal for him, like many others who met the same fate.

The pellet guns were introduced to quell the protests in the summer uprising of 2010 which claimed more than 120 people and rendered thousands of others injured. Under intense criticism, the police and paramilitary troops were asked to use non-lethal weapons as a crowd control armory. Later, the forces introduced three different ‘non lethal weapons’ which include pepper gas, taser and pellet guns to fight the unarmed protestors.

Even though the use of taser and pepper gas did not become controversial till now, there was a lot of criticism about the use of pellets as a non-lethal weapon. Since 2010, pellets have been used as a dominant weapon against the protesters, inflicting fatal causalities as well. So how lethal is this weapon?

“Pellets can kill a wild bore. They can kill a dear, a bear and are deadly enough to kill a human being. The pellets termed as a non non-lethal weapon do not altogether fall in that category,” a top Jammu and Kashmir police official, requesting anonymity as he was not authorized to speak, told Kashmir Life. “They are lethal in many terms”.

While explaining the making of the pellet gun, the tall, clean-shaven police official said it is actually a 12-bore gun. He said the lethality depends upon the cartridge containing pellets which ranges from Number 1 to 10.

“Each cartridge contains 600 small iron balls. When the cartridge is fired using the shot gun, the pellets are sprayed over the protesters with a speed,” he said. “A real bullet of the same caliber may travel twice as fast as these balls. The pellets are fired from the distance of 500 ft. “But if you fire it from less than 50 yards, it can prove lethal.” He said if the pellets were fired from the cartridge No. 1, it is enough to kill a human being, a dear or any other beast.

Sitting behind a polished desk at his plush office on the outskirts of Srinagar, the official said the pellet cartridges which fall in No. 1 category were used in 2010, resulting in deaths and severe injuries to protestors. “However, after realizing that it was proving detrimental against the protesters, the pellet cartridge falling in the No. 9 category is being steadily replaced by No. 1,” he said.

“The number 9 cartridge when fired sends out 600 small metallic balls. It has a force to pierce the person’s skin only and is not lethal,” adding, “We can’t rule out completely their lethality either. If the multiple pellets hit vital organs of a person from a close range, it can lead to deformity or in rare case a death”.

So far the past experience does not gel with the governments view that pellet gun can be used a crowd control weapon. It has proved deadly at many times leading to deaths and fatal injuries.

Like on August 19, 2010, briefly after its induction, the metal pellets caused first causality in Kashmir. The 19-year old Mudasir Nazir Hajam, died of his injuries in the hospital when he was hit by multiple pellets fired from a close range in his abdomen by a CRPF official in Sopore.

On August 30, 2010, 11-year-old Irshad Ahmad Parray sustained critical injuries after police and CRPF fired pellets to disperse protests near Cheeni Chowk in south Kashmir’s Islamabad town. Parray was rushed to a Srinagar hospital where the doctors declared him dead on arrival.

Similarly, on Sep 13, 2010, the third victim of pellet gun proved to be the cousin of JKLF Chairman, Mohammad Yasin Malik. Yasir Rafiq Sheikh (28) along with four others was hit by the pellets when he was playing carom on a roadside at a Maisuma street. As other four youth survived, Sheikh could not.

Leaving aside the death, the pellets have also led to permanent disability among the youth when it had injured the vital body parts. These injured are the ones who did not make it to the statistics of the dead. But are alive and living the lives of the dead.

Amir Kabir, 19, who has dreamed to become singer, is one of them. On September 18, 2010, a CRPF trooper fired pellet cartridges on the protesters near a cement bridge in Baramulla town. Some pellets hit his eyes due to which he lost the vision and with it his dream as well. Likewise, 17-year old Danish Ahmad of Tarzoa from north Kashmir’s Sopore town area lost his left eye after he was hit by the pellets fired by CRPF on August 19, 2010 on the protestors.

The medical authorities in Kashmir valley say that approximately 250 injuries were registered who were hit by pellets in their bodies in 2010 alone. During the recent protests in north, central and south Kashmir, the medicos have reported that among the odd 300 people injured, majority of the fire arm injuries were caused by the pellets.

A local newspaper quoted Chief Medical Officer, Baramulla, Dr Abdur Rashid as saying that in a single day, they received 85 injured persons in the age group of 25 to 60 years at a government-run health centre in Sheeri village.

“Our dispensary has treated all the injured. Most of them had their body riddled with pellets. Some of them had pellet injuries in sensitive parts including eyes, face and head,” the newspaper quoted an official at the dispensary as saying.

A doctor working in the emergency ward of Kashmir largest medical institute, Sher-e-Kashmir Institute of Medical Science, who wished to remain anonymous, told Kashmir Life that 30 percent of the patients he has treated in the two and half years had sustained pellet injuries. In 2010, the SMHS hospital conducted a survey in which it was found that 45 people had lost their eyes due to pellet injuries. This year, 15 patients have been admitted at the hospital with eye injuries caused due to pellets with least chances of recovering their vision.

“The pellets are as deadly as bullets,” the doctor said. “When they hit a soft spot of a person like back of head or chest, it may result in death. Some are rendered deformed if the bulk of the pellets hit at a same spot of the body. If the flying metallic balls pierce the eyes, it can cause blindness.” He said the patients sustaining pellet injuries are also hard to cure.

“If the pellets hit the body, like in the abdomen, they can cause multiple perforations. Hence the blood oozes out simultaneously from many parts. You can treat or seal one wound at one time. What about the other injured parts? Hence chances of the survival are less,” he said. 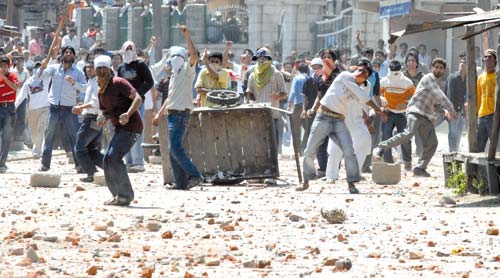 Another long term impact of the pellets piercing the body can be that it would change the cosmetic appearance of the body. “If a victim is sprayed with the pellets on his body, its marks get permanently imprinted on the skin. It would effect his social relations negatively,” the doctor said, adding, “It is also least possible that all the splinters could be taken out of the body due to their small size. If they remain within the body, they can deviate and damage the internal organs. So you need a life long treatment if such injuries happen.”

Owing to its lethal effects, the health officials unanimously agree over the point that the use of pellet gun should be stopped at earliest and it would be better if the government uses tear gas canisters and water cannons to control the crowds. “I think bullets are safer than these pellets,” the doctor claimed. “They cause only one entry and exit wound, unlike pellets”.

Another important aspect which has cropped up over the period of time is that most policemen and paramilitary forces are inept to use the pellet guns. They often fire pellets from the close range and mostly target the upper parts of the body. Hence the pump action shotguns or pellet guns are proving more deadly and continue to kill protesters as the weapons are being used by cops without any formal training.

In 2011 and 2012, the J&K police and paramilitary forces conducted joint exercises and imparted training for the use of “non lethal weapons” to its men. However, working on the ground, the armed personnel seem to be not fully learning the lessons, even as numbers of the patients with pellet injuries continue to increase.

When Kashmir Life contacted the top officials of the state administration for their comments over the issue, nobody was willing to speak on the record. The Additional Director General Police Law and Order, K Rajendra declined to comment over the issue. “Call Inspector General Kashmir to get details,” he said. Minister for Home, Sajad Kichloo and IG Kashmir could not be contacted for the comments.

In absence of any political solution to the Kashmir problem, the public demonstrations are expected to continue as the armed insurgency takes a back seat. It would be wise for the civil society and political leaders to mobilize an opinion to stop the usage of lethal pellet guns. If not, the fatalities caused by pellet guns will only rise in the times to come.