Apple apart, Kashmir has created a demonstration orchard in Srinagar outskirts where some of the best high-density fruits are grown, reports Masood Hussain 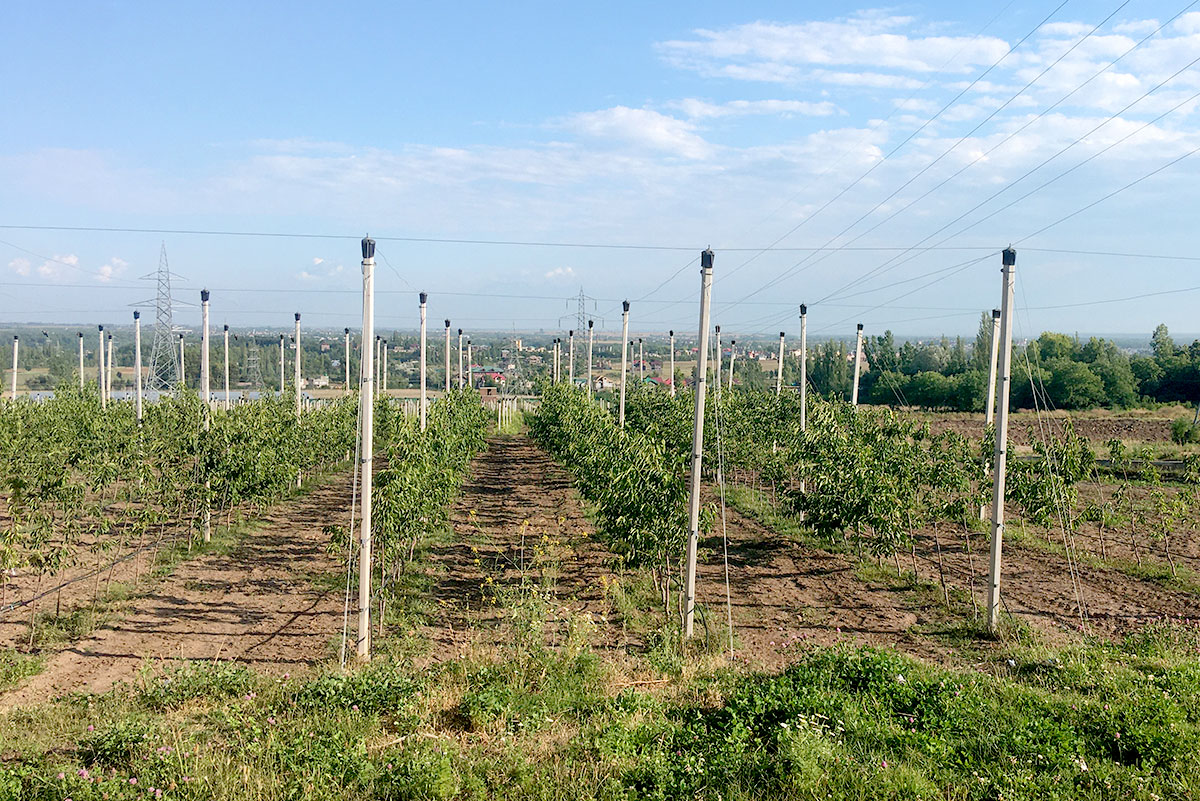 “If we see the horticulture in the rest of the world,” Izhan Javed asserts, “The varieties of fruits that we grow have been phased out from most of the world. We are at least fifty years late in reaching the next level of horticulture.”

Izhan is the Chief Executive Officer (CEO) of FruitMaster, a Lassipora based 12000-ton Controlled Atmosphere Store that has bagged a central government project to introduce the high-density fruits in Kashmir. While the government has provided them with almost 350-kanals of land at Zawoora near Khanmoh, in Srinagar outskirts, they are supposed to build, operate and transfer (BoT) the project to the Horticulture Department after six years. “This is called the Centre of Excellence and it would require three years for development and three years for maintenance.”

Not far away from this fast development multi-verity orchard, they have acquired a huge piece of land where they have started evolving a nursery of the fruits they are showcasing in the main premises. The Rs 7 crore project is aimed at creating a huge demonstration orchard and if the growers are impressed by what they see, they can actually acquire the root-stock from the new-age entrepreneurs.

They centre was recently in the social media focus for its cherries, which apparently were oversized – in comparison to the half a dozen varieties that Kashmir traditionally grows, and for their taste.

“These plants are in the second year and they have started bearing fruit and this year they produced almost 600 kilograms,” Izhan said. “People who consumed the fruit have been very impressive because they have not been able to have the same variety in Kashmir.”

The varieties are imported from Italy and they are around 30-35 mm in size, which is slightly less than double of the varieties that Kashmir grows. Their taste is distinct and they can weigh up to 20 grams a piece. “These are called European Sweet Cherries and they are the international standard,” Izhan said. “Right now, these cherries are imported from Europe and they fetch three times more value than the traditional cherries we grow.” Unlike the local cherries, he said, these have a slightly extended shelf life that – in a CAS – can go up to 45 days against the simple cold storage of 15 days in case of the endemic varieties.

Cherries are not the only fruit that is grown in this high-density demonstration orchard. There are apricots, plums, peach, pears, almonds, walnuts chestnuts, hazelnuts and many other fruits. All of these fruits have European rootstock and every fruit has multiple varieties.

“The idea is to have a particular fruit available for an extended time,” Izhan said. “If we get one variety of pears in May, we have another variety that is ready for harvest in June and another in July and it means the grower will have an extended engagement and returns.” Same is the case with other fruits. The last of the fruits is ready for harvest in November and the first in May. “It means the engagement is almost for most of the summer.”

High-density crops are a new agriculture movement in Kashmir that has started changing the peripheral economies fast. It all started with apple but despite the conversion of traditional orchards into the high-density plantations being the focus, the outcome has not been very impressive, so far. The experiment, however, has not failed. Government intervention by way of subsidies is one key factor that is yet to make the conversions of the traditional orchards as a mass movement.

The high density, however, has to get into other fruits as well. Kashmir has traditionally been growing a number of fruits but most of them have been almost abandoned because they have failed in creating the necessary market. Once the apricots were being hugely grown and the only outcome was its shell that was used in producing the edible oil. Once the low-cost mustard oil imports became popular the growers axed the apricot trees to pave way for apple and other fruit having commercial viability.

Kashmir market is desperate for apricot because this seasonal fruit has exceptional anti-carcinogenic properties along with peaches. The nearest apricot growing belt is Kargil but most of the crop is sun-dried for delayed marketing.

“We have a diversity of apricots in high density and the fruit is available for three months, if not more,” Izhan said. “They taste different and are ready for harvest at different timings.”

Not every place in Kashmir suits all the fruit plants. Most of Budgam and parts of Bandipore do not suit apple because of the soil composition. Even the Zawoora belt where the centre is located does not suit the apple as the centre itself demonstrates. Other fruit varieties, however, can change these places as the high-density plants yield more.

However, these plants grow in a different eco-system in which they require hale-nets, drip irrigation and the pesticides through mist fumigation. “We adopted the high-density horticulture but started in reverse,” Izhan said. “We created the CAS network first and then started working for HD crops and actually it had to happen in reverse order.” The orchard managers demonstrate the various stages of cultivation of these crops to the visiting growers.

Kashmir, according to Mahmood Ahmad, Director Industries has 31 operational CAS chain that can store up to 1.55 lakh tons of fruit. This network came up with an investment of around Rs 1000 crore. “We have 10 more stores coming up.”

Most of these stores remain empty for most of the summer because they only store apples for most of the winter. This essentially will initiate a new supply-demand chain once the high-density fruits start growing in bulk during early simmer for gradual consumption within and outside Kashmir. There is a vast gap between cherry and apple in Kashmir markets and most of the seasonal fruit that fills almost four months is non-local. Even locally grown peach and plum are mostly available for a fortnight.

Players in the high-density eco-system said the growers are gradually embracing the imported varieties because it has drastically reduced the gestation period and the return on investment is hugely improved. “Since most of these international standard fruits are imported in India, growers understand the importance of growing them,” one key player said. “The benefits have adequately been demonstrated by the apple in the last few years.”

Kashmir, they assert has started understanding the eco-system in which the high density operates. In all this, he said, the benefit in Kashmir is the soil. “Certain imported varieties now grown in Kashmir taste much better than those grown in Europe.”