Once the transporter of last resorts, the premier SRTC is struggling to find a role that could help it survive, reports Saifullah Bashir after visiting the employees who are desperately waiting for their post-retirement benefits

In February 2020, Ghulam Nabi Dar, a Ganderbal resident, retired as a technician in Jammu and Kashmir’s official carrier, the Road Transport Corporation (JKRTC). It is about to be two years now but he is struggling to get his post-retirement benefits.

This has pushed Dar to a frustrating stage in his life after putting in three decades to the corporation. The JKSRTC has no provision of any pension but it pays a compulsory gratuity to its employees.

Without these benefits and nothing much to do at this stage, Dar is finding it very difficult to make ends meet. Dar has a family of five to feed including three daughters and a son. His eldest daughter, 30, has attained the age of marriage but Dar has no option but to keep postponing the date of her marriage.

“I have nothing to feed my family,” Dar said. “I am suffering from multiple ailments and buy medicines on credit. We knocked on the door of every top official but they say the corporation is in economic turmoil.”

Dar is not the only one who has landed in this “miserable” state post-retirement. All the JKRTC employees who reached their superannuation after July 2019 have not received their gratuities. There are almost 350 retired employees who are waiting to get their lifelong savings. On average, every one of them should get Rs 12 lakh each. Officials in the erstwhile premier corporation said it lacks enough funds to manage this critical requirement.

“Except assurance, we are getting nothing. Our families are starving,” Dar said. “The savings of any retired employee is his only hope. Our corporation is non-pensionable too.”

In August 2021, 543 retired employees of the Corporation comprising sweepers, helpers, cleaners, bus washers, assistant fitters, fitters, conductors and drivers, primarily had gone to the court and their petition was allowed. The court observed that the employees are entitled to all these benefits on the analogy of their counterparts in the Jammu and Kashmir Industries Ltd and other corporations.

The corporation took the court direction to the finance department. It was not immediately known if there was any follow-up.

On December 15, 2021, the administration announced that 150-200 e-busses would be introduced in Jammu and Kashmir. In 2019, JKSRTC procured 40 electric buses from Tata Motors. The objective was to reduce the pollution levels and provide convenient transport to the public. The new fleet was supposed to help the transporter retrieve part of the market share that it willingly gave up in a cutthroat competition with the private sector.

These buses were handed over to outsourced crew on a contractual basis. While handing over these buses to the players from the open market, the corporation avoided properly using around 300 consolidated employees working with its for almost 10 years.

The SRTC employees union, once the most powerful trade union in Jammu and Kashmir, is quiet for the last few years. Privately, however, they ask why the corporation handed over the new fleet – with almost Rs 50 lakh apiece, to outsourced people “who even lack a service book”.

The corporation owns less than 900 buses and trucks and ferries around four million passengers and manages a cargo of around takes a load of around 380000 metric tons a year.

The corporation was hit by the turmoil as most of its ageing fleet went up in smoke. At one stage, its fleet was too small for its army of employees because the corporation has historically remained as a dumping ground for politically connected job seekers.

As the corporation lost most of its routes to private players, it got squeezed to a few routes, which it could not retain for lack of a proper working fleet. The corporation had the food supplies department as its most loyal client but there have remained serious issues in this relationship. This created a situation that the corporation is solely dependent on grants from the government. There were serious efforts to encourage the corporation to stand on its feet but all the efforts failed.

For the last more than 10 years, the JKSRTC is getting Rs 30 crore as financial support which adds to the modest earnings to keep the show going. “We have requested the government to increase it to Rs 80 crore so that liabilities can be met,” the corporation’s finance manager, Mohammad Shafi said. The corporation requires Rs 7 crore a month for the salaries alone.

The mismatch between the availability and the requirement is reflected itself by huge delays in dispensing salaries. Currently, the corporation has around 2000 employees and they get salaries a few times in a year.

“We receive salaries once in five months and once it is credited to our accounts, banks deduct their instalment against the loan which we have taken,” one employee working in the Pampore service station said. “Next day, we carry the same empty pockets.”

The corporation has dispensed with some of its assets, mostly land of huge commercial value in Srinagar and Jammu. But the insiders said that various departments owe the corporation a good amount and the managers are not recovering it. One official put this money at around Rs 50 crore.

Wajahat Hussain Durrani, who heads the SRTC employees union said the civil secretariat owes the corporation Rs 6.25 crore, CAPD Rs 11.5 crore, GPO Rs 4 crore. “Government announced buses will be provided to students to ferry them to the examination halls, we oblige and when we go with the bills, they say what for?” he said.

Insiders in the department said the corporation still has a good working human resource but requires it to be adequately managed. “They send a Srinagar man to manage a peripheral town where he would require living on rennet,” one agitated employee said. “How can he manage living there when he has no salary, at least not in time?”

Most of the corporation’s human resource is in Jammu and Srinagar cities. This has led the managers to miss the point that the periphery is the main area where they can earn if they manage it well.

Most of the peripheral stations lack adequate human resources. The Sopore manager, for instance, has no clerk so he pays the bills, books the challans, and keeps track of other things. It is a one-an show here around six people used to work. The Baramulla depot has a booking manager, a security guard and a store attendant. These three persons are handling the whole depot.

Kupwara depot runs six buses to Srinagar. It has one manager and two helpers. There is one person managing 60 trucks in one division.

Corporation insiders said the frequent transfer of the Managing Directors is playing riot with the institution. In the last six years, the corporation had nine Managing Directors. “When one officer has started understanding things and is in a position to take us to the next level, he is shifted out and the successor takes his own time to understand the corporation,” one employee said. “Ghulam Ahmed Sofi generated record revenue of Rs 105 crore. Dr Manmohan Sing and Arshad Ayoub also worked very well.”

“Yai natak laga rahay hain,” is what the incumbent MD, Angrez Singh Rana, said while commenting on the delay in salaries. “They get salaries after two three months”. He said he cannot pay the employees from his own pocket the employees must “work honestly” and do “fair collection”.

On post-retirement issues, however, Rana admitted the problem: “We have approached the government regarding the retired employees, and once the government will help then only we can help employees. We have no money.” He compared the corporation with the home. “Let them do work, earn and eat. If employees work wholeheartedly they can earn more than their salaries.”

Rana said the bills that various departments have not paid are “disputed” because the management has done nothing after 2010 about these bills. “Was the corporation sleeping during that time? It is their carelessness,” he said.

The MD insisted that privatisation is the policy. If any person (hired through outsourcing) does a mistake, he is answerable,” he said. “On the other hand, JKRTC employees go to court. We will run the corporation only through outsourcing.”

The corporation, according to erstwhile state law was created to provide the cheapest, safest and adequate transport facility to people. Now, the authorities say the corporation is a commercial entity. The corporation is the transporter of the last resort, be it disaster or war, the JKSRTC bus will be around.

“So, how can two things be done at a time?” asks Durrani. “Either we have to provide the cheapest service or strive for revenue. Let them decide the priority, things will follow.” 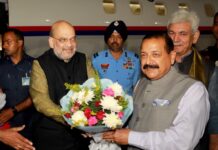