With unrest 2016 rooted down-south, the worst fears were about the fate of apple, the main mover-and-shaker of the peripheral economy.  Challenges were Himalayan but the growers fought to ensure that they do not lose everything, Syed Asma reports

In vegetable market at Sirsa (Haryana) when somebody “discovered” Kashmiri apples carrying anti-India slogans, it hit the social websites by storm.  But growers understood the plot. “It was an attempt to defame Kashmir horticulture industry,” Bashir Ahmad Basheer, chairman Kashmir Valley Fruit Growers (KVFG), said. . “How can growers send apple to the market with such writing?”

If true, it could add to the losses the sector is surviving with since September 2014 floods. Post-floods, Kashmir apple production nosedived to 11.70 lakh metric tonnes (mt). For more than two million growers managing 2.18 lakh hectors of orchards, 65% of them apple alone, this much of production is too small.

In 2015-16, however, fruit production improved to almost 24.93 lakh mts. Kashmir apple alone was 19.21 lakh mts. Akhtar Hussain, Deputy Director Horticulture, says the production and losses for the current fiscal (2016-17) are not calculated yet. He believes, however, the losses could be less.

Dealers, however, have a different story. “The unrest has taken its toll,” Basheer said. “Tentative loss is Rs 2000 crore. The actual data will emerge once we [fruit growers and dealers] sit together and calculate.”

“Hot and dry summer had its impact and then political unrest prevented us from last two crucial sprays,” Abdul Shakoor, a south Kashmir grower, said.

Varieties growing early and mostly concentrated in north Kashmir suffered because the harvest coincided with peak agitation. “We were locked up inside our homes and could not take proper care of our orchards,” Mushtaq Ahmad, a north Kashmir grower said. “Almost entire production of early varieties was rotten as we could not harvest it properly.”

Amid protests and crackdowns, the harvest was quick. The sector confronted a series of serious issues that impacted the margins.

Firstly, the disturbed situation since July triggered a scarcity of packaging material. Off late, Kashmir consumes lot of cardboard, bulk of which comes from Jammu. This year, local production was restrictive forcing growers to use wooden boxes which are costlier.

Secondly, local terminal markets, the mandis were closed.  Mandis in Kulgam, Pulwama and Shopian did not open this year. The in Sopore and Srinagar worked around midnights for a few hours.

Fourthly, grower was desperate to see the crop getting out of the orchard and reaching the market somehow, regardless of the returns. In absence of adequate transport, freight touched skies that reduced the margins. Truckers doubled and even tripled the freight. At high freight, they pushed the crop to Delhi, Jammu, Mumbai, and the sudden despatches triggered glut that reduced the rates.

Basheer said the markets have stabilized and rates gave improved. “But almost 75% of the produce is already consumed,” he said. Early stabilization was partly because Himachal Pardesh produced apple in much less in quantity and quality which helped Kashmir apple to bounce back fast.

The growers and dealers insist that restrictions imposed by authorities compelled them to sell the fruits in an unplanned and unorganised manner. At one point of time, the Jawahar Tunnel was closed for around 10 hours.

Part of the desperation for selling the crop came from a series of raids in which the government forces damaged the harvested crop. Ghulam Qadir Pandit of Pulwama lost 500 ready-to-load apple boxes to one such raid. In a few cases, Basheer alleges, crop was damaged while it was on trees.

Apart from serving most of the mandis across Indian mainland, Mushtaq Ahmad said part of the crop would go to the border markets near Nepal and Bangladesh. “This year, accessing Delhi was difficult and reaching the outpost for Bangladesh and Nepal was literally impossible,” Ahmed added. 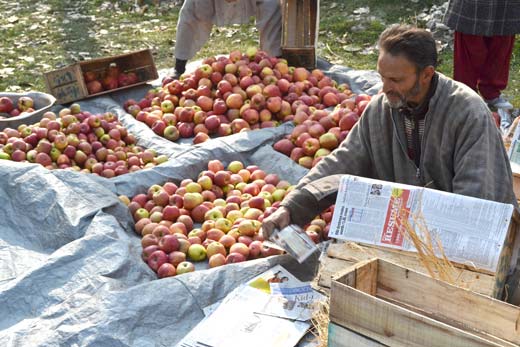 The only saving grace, however, was the controlled atmosphere storage capacity that is filled to the brim. Scared of the low rates caused by the glut, market insiders said, a section of the growers who could risk going against the trend, stored it. “Across Kashmir, we have the capacity of 60000 mts which is completely utilized,” one market insider said. “But this does not make much of what Kashmir sold at throwaway costs.”

The crop stored in the CAS facilities across Kashmir is not more than two million apple boxes. Kashmir sells almost 70 million boxes a season. “This makes just four percent of the overall sale a year which may eventually reduce the overall losses a bit.”