Away from the Srinagar’s politics a small tourist spot in Pahalgham is heaven for Israeli tourists. They spend their days watching ‘birds’. Suhail A Shah on his visit to Aru meets a few of them

After a pleasing overdose of breath-taking beauty, what catches the visitor’s eye at the end of this narrow road, snaking through lush green hills and gushing waterfalls, is a sign board in Hebrew.

The road is the only approach to Aru village, in South Kashmir’s picturesque tourist resort Pahalgam. Aru is a mesmerising valley with spotless meadows surrounded by majestic mountains dotted with gushing waterfalls-spreading as far as one could see.

Under a state sponsored scheme, residents here have turned their houses into guest houses. Lined on both sides of the road, these guest houses comprise more or less the whole of Aru village, located some 12 kilometres North-East of Pahalgam town.

The first of these guest houses is Rohella, which is also the only word in Latin script written on the ‘signboard’ erected over its tin fence. The signboard evokes interest for both who recognise the script and the ones who do not.

But for the people who recognize the script the signboard is a surprise because the language belongs to Israel.

To understand the phenomenon of Hebrew travelling from Srinagar’s Boulevard to the dusky Aru, the residents are the best guides. Aru, they say, is a preferred destination for tourists from Israel. Almost every one of the guesthouse hosts more than a hundred Israeli nationals every year between June and September.

Only Rohella Guest House, according to its owner Abdul Gani Shiekh, hosts as many as 250 Israeli nationals per season. The ubiquitous backpackers are there to tell the rest of the story.

A 47-year-old IT professional from Tel Aviv, says even in the IT era, word of mouth travels faster in a small place like Israel. “We get to know from our friends. Israelis come to India more than they go to any other place and they have been visiting Kashmir too,” said the professional who wishes not to be named. “People who have visited this place (Aru) tell this is a safe haven for Israelis.”

Besides, he says, a travel website named ‘Lametayel.co.il’ ranks this place (Aru) as safe.

“In fact the website gives information about the Rohella Guest House as well,” says the girl from Haifa, who has just finished her mandatory military deputation and is about to join university to study Economics and Politics. Israel is perhaps the only country where basic military crash course is compulsory for all. Once they complete the course, they get stipend for the time and most of it goes in their off shore travel.

Interestingly, most of the Israeli tourists talked in detail but wished to remain anonymous.

The discretion probably stems from the fact that Kashmir is not a very favourable place for Israeli nationals, which they (the Israelis) promptly agree to, narrating the tales of ‘heat’ they had to face on the streets of Srinagar and other places.

The tourists from the ‘conflict zone’ acknowledge that they are looked down upon in Kashmir in many ways they are not prepared for.

This 25-year-old boy, who is on a vacation with his girlfriend, says it was a shock to see “Free Gaza” graffiti in Srinagar.

The boy says that he had been warned in advance by a friend. “He was refused to be served at an eatery in Srinagar, after the waiter came to know about his nationality,” he said.

While some of them come across as very guarded and acutely aware of their surroundings, some seem making merry of their visit brushing aside the negativity.

Alon family, from Golan Heights area of Israel, was one such bunch.  They said even though they did feel insecure at certain places in Kashmir but their visit has been a very pleasant one nevertheless.

Sofia Alon, a former soldier and now a waitress, describes Kashmir as a beautiful place with beautiful people.

“The beauty of the place and the people is worth the trouble,” says Sofia, who posed happily for a picture with her parents and brothers.

All of them, however, unanimously, agree that things are way positive and easier in Aru, which makes it a preferred destination for them.

“Over the years the only tourists that come to Kashmir are Indians and they do not stay in Aru,” says Abdul Gani, Sheikh’s son. “It is more or less only the Israelis who prefer to stay here.”

He feels that the hoteliers and Guest House owners in Aru would have to shut shops if it was not for the Israelis.

“We have to keep the kitchen fire burning. If this is the only way, so be it,” he says.

Most of the other people in Aru feel the same way as Sheikh does; however, the Israeli tourists are not known to be good at spending money. 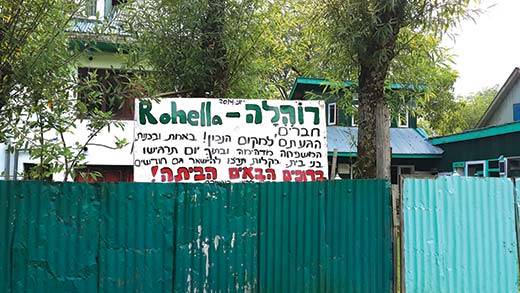 “Yes, they do not spend much but something is better than nothing,” a shopkeeper in the area opines.

Besides, they divide their time between trekking and their stay in Aru.

Aru is the base camp for treks to Kolhai glacier and Tarser Lake, further uphill.

Most of the Israeli tourists spend weeks trekking to upper reaches with state of art telescopes, which they say are supposed to enhance their experience of, “bird watching”.

People in Aru feel there is a certain ‘drug angle’ to presence of Israelis in the village. This belief comes from the Israeli tourist’s overall reputation in India, especially the Himachal Pardesh.

Kasol a small village, much like Aru, in North Indian state of Himachal Pradesh (HP) located some 42 Kilometres East of Kullu, which over the years has earned itself titles like ‘mini-Israel’ and the ‘drug-capital’ of India.

Kasol is also known for the rave parties, where drugs flow freely, “frequented and most of them organised by the Israeli nationals.” There are, however, no details about Kasol in Aru.

Though there are voices unsupportive of the trend but Aru’s economy is tourism dependent and there are almost no other alternatives to look for. The fact that the village remains inaccessible for major part of the year adds to the woes.

Inside the Rohella Guest House three Israeli nationals, including a young girl, occupy the dining table inside what is an annexe of the main structure.

Another young girl squats on the floor writing into a notebook, while the Kashmiri owner of the guest house sits behind the dining table smiling at his guests.

The setting involuntarily makes one think of a particular summer night in 1991, when seven Israeli nationals, playing cards inside the Garden of Heaven House Boat in Srinagar, were abducted by a lesser known militant group Pasdaaran-e-Inqilaabi-e-Islam (PID). The attack was a first on foreign nationals in Kashmir.

Since then the advisory, issued by the Israeli government, asking their citizens not to venture into Kashmir. But over the years the advisory is not being strictly followed and Israelis are once again regulars in Kashmir. After all, it has been nearly three decades since then.