Contrary to the general belief that Kashmiri women have remained insulated from the politics and continue to remain the victims of conflict, Shabir Mir reviews a new scholarly book that explains why this narrative is an extension of the state story lacking relevance on the ground 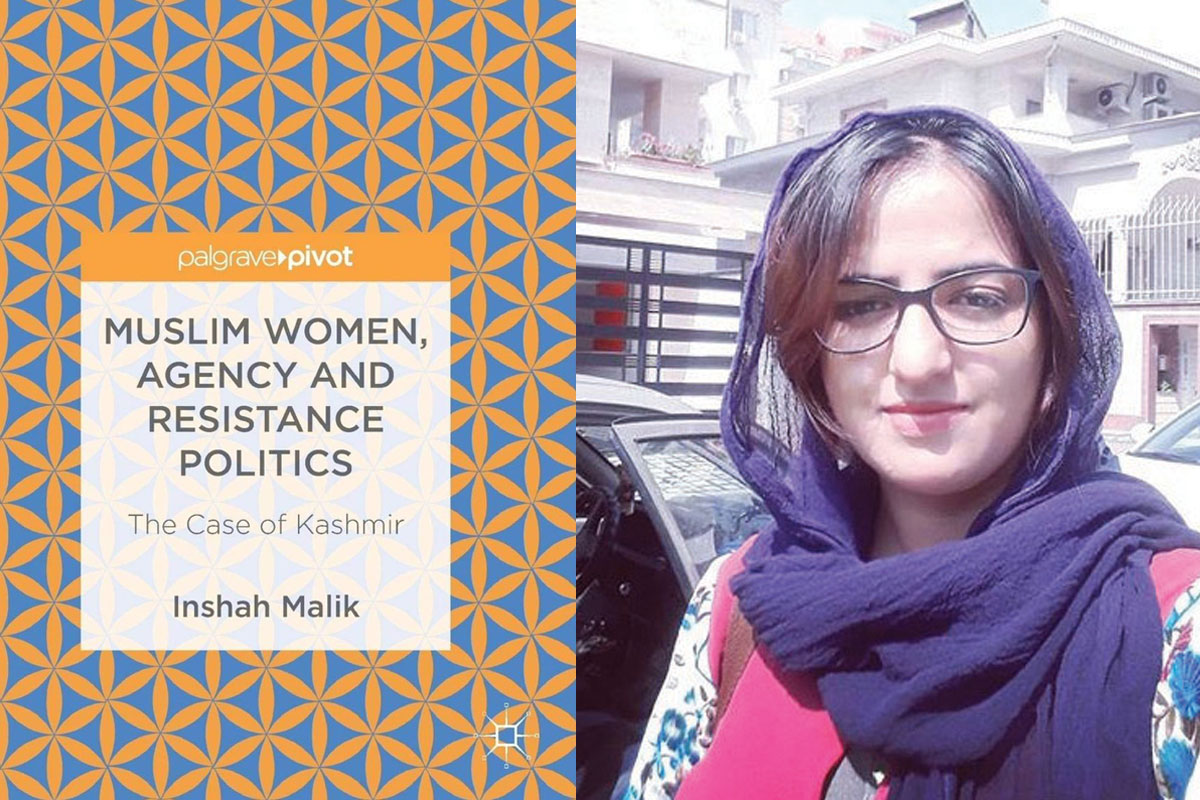 Last year a picture of a young Kashmiri girl throwing stones grabbed the attention of the Indian media and became the locus of many a discussion, debates and commentaries both offline and online. It became an imperative out of Indian public opinion to ‘rehabilitate’ this ‘angry Kashmiri girl’; so much that she had to be made ‘Captain’ and the ‘goalkeeper’ of the state women’s football team. This ‘rehabilitation’ was duly publicized; there were even talks of Bollywood biopic on her life. Now the question that needs to be asked here is why doesn’t any picture of a young Kashmiri boy elicit the same response from the Delhi media and the Indian public? Not that there is any dearth of pictures of young Kashmiri boys throwing stones but then why doesn’t someone ask for a similar ‘rehabilitation’ for ‘angry Kashmiri boys’?

The ‘Kashmiri Muslim woman’, as the name suggests, subsumes three identities. The first identity is that of a ‘good’ Kashmiri whose chief political investment is peacebuilding and is thus a potential ally of the state but who is thwarted by the ‘bad’ Kashmiri male.

The second identity is that of ‘Muslim’ wherein the delicate, beautiful, docile ‘She’ is repressed by the beard-bearing, gun-wielding, azaadi-caliphate demanding, Islamist ‘He’.

The third being that of a woman who has no political agency of her own but is rather conditioned to be a passive, suffering witness to the violent politics of a secessionist movement with which she has nothing to do; a ‘victim caught between two contesting militaristic patriarchies’.

The Kashmiri Muslim woman being thus a triple victim needs to be protected. A Kashmiri Muslim girl out on the streets on her own and throwing stones on her ‘saviours’ crumbles the whole construct and in turn dents the whole narrative of ‘an Islamist, patriarchal, Kashmiri terrorism’; the nation cannot reconcile with it and hence the girl in the picture needs to be rehabilitated and thus proven that she is an anomaly, an exception that has been taken care of.

Inshah Malik’s Muslim Women, Agency and Resistance Politics: The Case of Kashmir is a scholarly treatise that surgically deconstructs this “Kashmiri Muslim woman” and in the process demolishes the whole narrative that has been built up with propagandist zealotry over the years. She explains it herself: “The aim of this book is to leave behind the miasma of confusion and move towards understanding the historical and deliberate nature of women’s agency in the resistance politics of Kashmir, in which women are not merely accidental victims but conscientious resisters.”

The book is organized into five chapters with first chapter serving as an introduction to the structure and the dialectics of the book overall and chapter five as a conclusion and summing up. The remaining three chapters’ deal with the deconstruction of the three identities under consideration although such a neat division is more of a syntactic than a semantic one as the three identities overlap and spill over into each other.

The Second Chapter, Kashmiri Nationalism: Women, Class and Plebiscite deal with the ‘Kashmiri’ identity of the Kashmiri Muslim woman. As Inshah Malik herself notes this chapter ‘maps the origin of an alternative political consciousness of Kashmiri people and constructs a women’s history of political resistance against the Dogra rule of Kashmir.’ The author builds up a narrative from history, both written and oral, of Kashmiri women who actively participate in the early Kashmiri Nationalism exemplified by the anti-Dogra movement and is epitomized in The Plebiscite Front Movement; hence proposing the ‘Kashmiri’ identity of the Kashmiri woman is not an incidental one but rather a conscious, active identity which she herself has strived to achieve and has not been just bequeathed to her. By examining and analyzing the role of an educated, political bourgeois Akbar Jehan on one hand and the role(s) of ‘unlettered’, proletarian women like Fatme and Zaine on the other hand, Inshah Malik very deftly builds up a narrative that could not be dismissed as ‘elitist’ only or ‘exceptionalist’.

Besides as is revealed by one of the interviewees: “There was also another section of women who had contributed in a significant but concealed way—wives, daughters and mothers of the Front’s male members. Their jobs were to make posters and pamphlets for distribution and awareness. Many women were arrested, jailed and long-term cases were registered against them, and despite the stigma, it brought to women in a traditional society. Women also formed the cadres for phenomenal street-level activism. Certain areas mostly of main downtown Srinagar became fundamental focal points for women’s activism.”

The Third Chapter, Resurgence of Muslim Consciousness and Islamic Liberation Theology is a take on the “Muslim’ identity of the construct. Again in the words of the author, “Religious resistance politics is a project of Islamicate modernity in which women created agential positions which culminated in an armed struggle in 1989. Through this chapter, I try to demonstrate that women’s Islamicate political projects were formulated to challenge the social patriarchy and the Indian state. The Islamicate project was constructed as a response to the debilitating violent atmosphere endangering women’s multiple identities.” This chapter broadly builds upon three case studies: Aasia Andrabi (Dukhtaran e Millat), Anjum Zamruda Habib and Yasmin Raja (Muslim Khwateen Markaz), and Farida Dar (JK Mass Movement). Between the three of them, Inshah Malik tries to show the complexity of the context and the difficulty of the agency of Muslim woman in Kashmiri resistance politics.

Aasiya Andrabi representing the seemingly conservative end of this spectrum and Farida Dar the liberal end while Anjum Zamruda Habib and Yasmin Raja are somewhere in between. The negotiation of these women of their Muslim identity and political agency is extended to the nameless, faceless multitude of Kashmiri woman through this observation of Farida Dar who “had witnessed places where women literally did not leave their homes, but the death of a male family member or disappearance had pushed women to the forefront of the struggle. Women were now making trips to police stations and army camps looking for their relatives and taking care of their homes and hearths.”

The Fourth Chapter, Militarism, Occupation and the New Women’s Resistance is a chapter which ‘explores women’s subjective experience in a military takeover. Women suffer victimizing experiences and find alternative expressions for political dissent without internalizing such victimization.’ Again, trying to build up a broad-based narrative, Inshah Malik profiles a ‘well established and well known’ Parveena Ahangar on one hand and ‘the unknown but common’ Raziya and Munavar on the other. She also examines the rise of ‘resistance writing’ by a new breed of young Kashmiri woman and in the process unravels the relational agency of young writers, which directly speaks to the feminist notions of liberation. The chapter builds up a cogent argument wherein the agency is located firmly with the woman who refuses to budge under the military might and state apparatus and recognizes that “Bodies, which become central in the understanding of resilient people, who do not allow political subjection to form their behaviour or allow the state patriarchy, define a woman’s ‘place’. In the state’s imagination, they become prime insurgents not by carrying out an armed rebellion but simply by existing as bodies that refuse to be shaped by the coercion of the state.”

Overall the disciplined research and the scholarly effort that has gone into the making of this book has not been vain. It remains to be said that the book appears to have restricted itself mainly to the fieldwork carried out in Srinagar predominantly. The book would have certainly gained had it also extended its scope to other parts of the valley in general and rural areas in particular which might have revealed interesting perspectives on the subject under consideration.

Nevertheless, Muslim Women, Agency and Resistance Politics: The Case of Kashmir, in the words of Professor Dibyesh Anand, is a welcome and urgent break from India-Pakistan dominant narratives.