Since 2014, a group of young men have been busy in helping the needy, feeding the poor, supporting needy students, helping addicts leave drugs and now in mass marriages of the deserving adults, reports Hilal Shah

After having predawn meals Umar Wani remains busy with his social media page to post about the stuff which he needs on the daily basis to provide Iftaar kits to the attendants of patients admitted to the Sher-e-Kashmir Institute of Medical Science (SKIMS), Soura.

Umar heads the We the Helping Hands Foundation, an NGO that has been serving people since 2013. Accompanied by dozen of youth volunteers, they were busy during the month of fasting, serving the breakfast Iftaar to the fasting attendants.

“From a very early age, I had a keen interest in social work and serving people,” Umar said. “When I shared my passion with my teacher he suggested me to start a kind of platform where I could reach to people in need of support and help.”

The September 2014 floods were devastating and the crisis was much bigger than the capacity of the government. As thousands of volunteers joined the rescue and relief, Umar was one of them.

In 2014, there was some survey suggesting that there were around 35 thousand girls in Kashmir who had crossed the age of 30 and are yet to get married due to financial crises”, said Umer. “I came up with the idea to hold marriages of young adults who cannot bear the costs. Initially, we started at an individual level with utmost secrecy of the beneficiary identity”

Late marriages, Umar said have been the burning issue in Kashmir. There were some groups working on mass marriages.

“Initially, we focused on drug addiction because youth in good numbers are addicted to drugs,” said Umer. “We held counselling programmes in colleges, universities even I use to meet individuals at times so that they can get rid of it”.

Umar said he was bearing all the expenses of those persons who were involved in drugs and used to send them with Tablighi Jamaat for three days to 40 days. “This helped us bring back almost 150 students from drug addiction and they all are now in stable positions.,

Gradually Umar along with his team stepped out from Srinagar city  “We have identified almost thirty students throughout the Kashmir who belong to downtrodden families or are orphaned. They are enrolled in different schools in Srinagar. “They do not spend even a single penny from their pockets as we cover their all costs,” Umer said. “We have identified some widows in Srinagar and are providing groceries to them”.

Umar’s group didn’t restrict his work. For the last four years, they are into arranging the mass marriages of the most deserving adults.

On June 25 in 2019, they held the first mass marriage function in Srinagar in which 19 couples who belonged to different areas got married

“It would have been never possible without the support of the masses,” Umar said. “I use to post on my social media page about the items that we need on such occasions. These included luggage, blankets, suits, slippers and many other things, the only thing which we did not offer was the Mehr”.

Social media has been the main platform for Umar’s group. “The people who come to us belong to distressed families, their earnings are meagre, they are unable to bear expenses for the marriages of their wards”, Umer said. “In mass marriages, we give ten wedding suits, one luggage, one sweater, one Tilla Pheren, one Kashmiri shawl, sandals, hosiery items, and all the basic items which they require.”

After the Covid19 outbreak in 2020, there was a complete shutdown worldwide including in the Kashmir region. Lakhs of people were rendered jobless and were unable to find even proper food. A number of NGOs stepped up to assist these families.

“We worked very hard in the first phase as people were literally locked in their homes,” Umer said. “We distributed four thousand food kits to needy families which include Aata, Haldi, Red Chilli, Oil and many other things”.

In Ramzan, the month of fasting, his group is offering Iftar and Sehri, predawn meals to persons who are unwell. The volunteers p[ersonally serve the food in the SKIMS.

This, he said, is being done for the last four years. “On a daily basis, we provided one thousand Iftaar kits and 700 Sehri food kits to the attendants in SKIMS,” Umar said, insisting it is not as easy as revealing numbers. 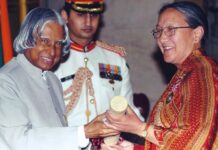