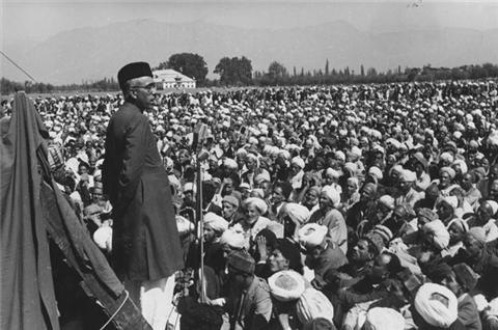 (Sheikh M Abdullah speaking to a huge crowd in Kashmir.)

KL: Talking of Bakshi era, If Moya Muqaddas crisis had not erupted what do you think would have happened?

VB: Perhaps Bakshi would have continued for some time.

KL: Was it done to undo his rule”

VB: That may have been one of the objectives.

KL: But why does it remain one of the biggest mysteries of Kashmir?

VB: That only GoI can say, or people, but unfortunately both Maulana Masoodi and Mirwaiz Farooq are dead.

KL: Was there any effort in the media to do some investigative reporting about it?

VB: A section tried. Malgaonkar was the editor of Hindustan times, he wrote some good pieces.

KL: Many don’t rule out Pakistan’s role. What do you think about that?

VB: I don’t think so. Why would Pakistan do it then?

KL: Well those were the turbulent years, and  ..

VB: Nothing can be ruled out, because both Indian and Pakistan agencies have been operating freely in Kashmir.

KL: Can B N Mullick’s book’s on that crisis be taken as an authentic account?

VB: No he has tried to conceal much, and tried to give twist to some of the events. It is more of a politically motivated account.

KL: This chapter of Kashmir’s history remains lost and nothing has been done.

VB: Yes, nothing has been done.

KL: There are a quite a few incidents but this one is important.

There were two people from Praja Socialist Party, (Sadiq Ali and Madu Lime) who came here and wrote a book on the atrocities and massacres in Kashmir then. They had gone to Delhi and told that this is going to lead to total alienation of people. That book is the only one which has given some fair account of massacres in 53.

KL: Talking of Bakshi again, he was Abdullah’s trusted lieutenant, why did he ditch him?

VB: Number one is that he was used by GoI. Number two is that everyone is ambitious. Bakshi was trusted because he was the effective minister.

The problem was that there were different groups, one headed by Bakshi, other headed by Baig. Abdullah was trying to balance the two so that none revolts against him. Ultimately Bakshi revolted. And these, G M Sadiq, Mir Qasim who were in the Azal Baig camp, joined hands with Bakshi. Obviously it was manipulated by New Delhi. So all of them joined hands and they were in majority in the cabinet and they ousted Sheikh. New Delhi used them, as it thought Bakshi is an integrationist as compared to Abdullah and he would not be so ambitious. He would be amenable to pressure, and he would be weak as compared to Abdullah.  Because Abdullah was a popular leader.

KL: You say Sadiq was personally very honest, so what was the motivation for him to surrender the autonomy, whatever J&K was enjoying?

VB: He was pursuing more or less the communist agenda then. They worked closer for integration. At one time communist party wanted maximum autonomy for Kashmir, even independence, but subsequently they became part of the national mainstream.

KL: And when Sheikh Abdullah finally came back in 1975, was he a changed man?

VB: That was a total surrender on his part.  We were also working for his release and his return to power.  I was secretary of the reception committee in 61. I took him in a procession in Jammu. Then I arranged a meeting. I invited all leaders, Bakshi, Abdullah, G M Sadiq even Prem Nath Dogra in Premier hotel and they all met for the same time. Bakshi and Abdullah, they embraced each other and hugged each other.

In  1968  JP (Jai Prakash  Narayan) came for a people’s conventions, he said you are committed to Kashmir’s accession to India subject to the conditions that it will be confined to three subjects –Defence, Communication, External Affiars. GOI has made commitment to you that it will remain confined to three subjects. If you accept this proposition I will fight for you in every nook and corner of India, agitate, and see to it that you will have greater autonomy.
Subsequently there was a public meeting, where JP spoke. Abdullah also spoke, but he ridiculed JP.

Abdullah said that JP was playing an Indian game. So that time he was not even in favour of greater autonomy. He criticised JP for that, but when he surrendered before New Delhi in 1975, it was on New Delhi’s terms,  after Delhi accord. Not only that, it was also an undemocratic exercise. He was to come to power without seeking people’s mandate.

KL: And in Congress House!

VB: He had agreed to join the Congress. He was going to be elected the leader of the Congress legislature party, but it was New Delhi which backtracked. And when he was in power till 1982 he did not pressurise New Delhi. I asked him once, and he replied that he wanted to work on the same wavelength as New Delhi.  In fact even during emergency he did not oppose the emergency. Even though Emergency was not extended to J&K but Sheikh arrested number of people and banned newspapers.

Sheikh Abdullah or subsequently Farooq Abdullah did not do any thing, though they could have. Their argument, privately, was that after creation of Bangladesh, India is much stronger. My own feeling is that Indira Gandhi had reports about Abdullah’s deteriorating health in Jail. She was advised to use Abdullah’s goodwill for India. Abdullah on his part was under pressure from his family. If Abdullah had asserted he could have negotiated for 1953 position. He could have sought greater autonomy. He could have come back as prime minister, if he had asserted. But he did not.

KL: How did you manage the emergency era, though it was not extended to J&K?

VB: It was difficult. Abdullah was trying to appease New Delhi. In fact once I asked him why he was not opposing emergency and supporting JP who had supported him earlier. He said No, ‘How can I, I have to work on the same wavelength’. During the Emergency, Shameem Ahmad Shameem came from Delhi. Those days Morarji Desai was on fast and JP was attacked by youth congress activists in Calcutta. Shameem came to me told me he had talked to Abdullah about writing a letter to Indira Gandhi. Shameem said that Abdullah had agreed to writing a letter to Indira Gandhi asking her to talk to opposition leaders.

We drafted the letter, Shameen had to leave the same night, so we needed Abdullah’s signatures. Abdullah was at a college function. We went there and sat next to him. Shameem asked for Abdullah’s signatures.  Abdullah looked at the paper, and remarked, “O I haven’t brought my specs with me.  What have you written in this?” We said that it says there is need for reconciliation, talking to opposition leaders is important, that it is unfortunate that JP has been attacked, and Moraraj Desai is on fast.  Abdullah remarked if we were putting him in trouble. He signed anyways. Indira Gandhi who would not bear any opposition took strong exception of the letter, and her secretary O Mehta conveyed that to Abdullah.

So when I met Abdullah again, he was annoyed and told me that we had put him in trouble. He asked what all we had written in the letter. Some days later, statesman came out with an article on edit page about the letter. Quoting the letter, the article said Sheikh Abdullah has shown the way, and went on to hail it. Happy, I went straight to Abdullah with the article. As he read it, he forgot that he had rebuked me about it a few days back. Instead he remarked. “Of course I only say what is right, I call a spade a spade”.

KL: After Zulfiqar Ali Bhutto’s execution Kashmir saw some riots against Jama’at families. Was state a part of it?

VB: No I don’t think so. In fact Sheikh Abdullah was not happy. He was also annoyed that Kashmir has reacted to Bhutto’s killing, while it was calm when he spent years in Jail. Abdullah’s feeling was that Kashmiris should have revolted when he was put in Jail, but instead they reconciled with Bakshi, Sadiq and so on. So he was dismayed.

KL: So is there something about the Kashmiri character that many writers and analysts point to, that they reconcile with everybody?

VB: There is something, but there are reasons for it. There is conflict, but life has to go on. When Abdullah was arrested, there was violence, but repression followed. And then Bakshi came up with appeasements. He gave subsidies, free education and jobs, etc. so people reconciled.

KL: So was there a kind of disconnect between Abdullah and people before 47 that Baskhi could fill the void?

VB: To some extent. There were few things that people were not happy about. Like forced collection of food. Then when there was shortage of food, and Abdullah asked people to eat potatoes. There was resentment. Then there was ruthlessness, excesses by NC activists. There was suffocation. However later in Bakshi era, the suffocation increased. In Bakshi’s era shops would display ‘No politics here’.

KL: Is it true that you brought Ghulam Nabi Azad on political fore front?

In 1977 he was wavering.  The emergency had ended and a new government was at Centre. We met in Delhi, and he told me that he wanted to leave Congress.  I prevailed upon him after  along discussion.

Read the first part of the interview here.