The alleged involvement of a top Congress leader in the supply of spurious drugs to government hospitals not only speaks of the failing standards of healthcare in the state but it has also opened a can of worms whose numbers are only growing by the day, Syed Asma reports. 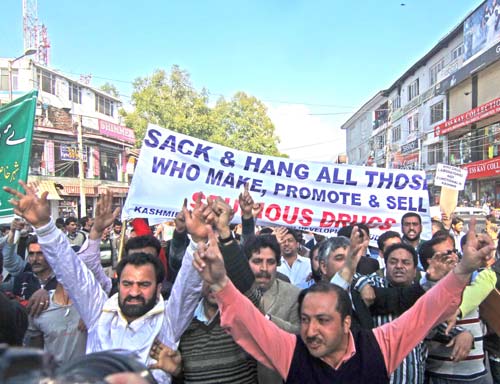 It is not for the first time that the availability of spurious drugs in the markets across Kashmir has grabbed headlines. What makes the present case different and indeed disturbing is the magnitude of reaction and the alleged involvement of former health minister, Sham Lal Sharma in the racket. Doctors, chemists, drug associations and civil society groups have come out in unison to protest against the apathy shown by the government towards healthcare in the state and are demanding dismissal of Sham Lal Sharma.

In its 2008 report, Assocham, an apex trade body in India noted that while substandard and fake drug factories are based in Punjab, Haryana and UP, their main market is Jammu and Kashmir state. Last year, a debate was triggered about the availability of spurious drugs in Kashmir when Dr Naresh Trehan, a renowned Gurgaon-based Cardiologist, said that many deaths in J&K are caused by fake, substandard or expired drugs resold in new packages, “It is known to druggists and medicos that many pharma agencies have been doing so with impunity,” he had said.

Another noted cardiologist, Dr Surinder Bazaz, sharing his experience of practicing in Kashmir since 1997, supported Trehan’s beliefs, “In Kashmir I have come across drugs which you can’t find anywhere else in the country. It seems as if this state has turned into a safe bastion for the trade in spurious and substandard drugs. Perhaps the highest number of fake drugs worldwide is sold here,” he said.

This year’s protest which has brought out a cross-section of people on roads was sparked by the discovery of spurious drugs approved by the government for three private suppliers. These drugs were consumed by the patients at hundreds of government hospitals and primary health centres across Jammu and Kashmir.

Forensic tests conducted on the drugs supplied to government hospitals made some disturbing revelations.“Tablet Maximizin-625, Injection Curecef-1000 and Injection Amcilin were found to be of sub-standard quality,” says Dr Nissar-ul Hassan, a consultant at SMHS hospital, one of the largest, government-run hospital in the state, and President of Doctors Association of Kashmir (DAK). “These medicines are purchased and consumed in government hospitals in bulk. They are the most frequently prescribed medicines in Kashmir,” he added.

The forensic test conducted at a Srinagar lab on Maximizin-625 (Batch No PBT-1583. Expiry date: January 2014) revealed that it contained zero milligrams of Amoxicillin instead of 500 milligrams written on the blister pack. Samples of Curcef-1000 (Batch No RHI-05/54, RHI/03/63 and RHI-11/07 with different expiry dates lifted from hospitals in October 2011 and July 2012 suggests it contains particulate matter which on injecting in a human body can cause instant dead, Dr Nissar-ul Hassan says.

In the recent session, a latest Comptroller and Auditor General (CAG) report claimed that in past five years from 2007-2012, about 12860 deaths took place at SKIMS. Of this, 7875 people, more than 60 percent, died after 48 hours of their admission. As the cause behind the deaths was not ascertained, the doctors are now apprehensive that spurious drugs, which were in circulation, might be one of the reasons for their death.

Besides, more than Rs 1 crore was sanctioned to establish a drug quality control laboratory at SKIMS almost a year ago, but till now, the amount remains unutilized. Last year, the sorry state of healthcare in Kashmir became public when more than 300 children died at the state’s only children’s hospital. With the latest spurious drug scandal breaking out, people are now blaming the circulation of spurious drugs for these deaths.

While winter session of state legislature was on, the news of spurious drugs reached the assembly. Lawmakers created ruckus inside the legislative complex. While the discovery of spurious drugs is not something new, political analysts believe that it was the internal rift within Pradesh Congress Committee which brought out the muck.

Ever since the controversy over spurious drugs broke, Sham Lal Sharma’s name is in the news for all the wrong reasons. One, it was under his tenure when these drugs were supplied to hospitals across the state and second, his close association with Ashok Sharma, the owner of ‘Lifeline Pharmaceutical Traders and Surgicals’, the supplier of Maximizin-625.

Ashok Sharma is a resident of Mutti in Jammu. A close associate of Sham, Ashok was his polling agent in the last assembly elections. Sources close to the former health minister say that when he was expelled from his government job in health department after which he joined politics, he started a business unit of cold drinks in Jammu in partnership with Ashok. The two later decided to switch over to the trade of supplying drugs to government hospitals.