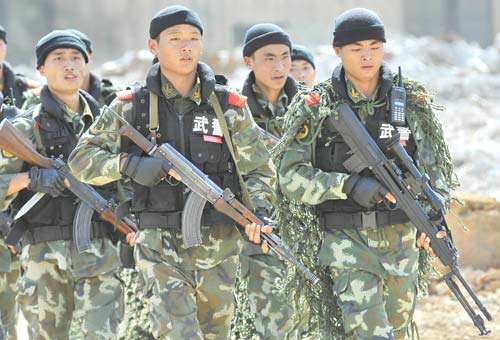 Ever since around 30 Chinese soldiers drove into Eastern Ladakh, there have been three flag meetings between the rival armies. But the issue is unsettled. While the concern is at its peak in Delhi, Beijing is apparently unmoved.

“I do not agree with your allegation that it is the Chinese side that has caused the provocation between the border troops” Chinese Foreign Ministry spokesperson, Hua Chunying, said when asked about its intrusion in Depsang Valley near Kuyul. “It is inevitable for problems to prop up in border areas. When there is a problem, it should be resolved through friendly consultations through existing mechanisms and channels”, she said.

But that does not reduce the tensions. Army Chief General Bikram Singh flew to J&K, visited all the commands across the state and returned to brief the defence minister AK Antony. In its formal responses, the Army has given various options to the government which includes aggressive use of the military. “All the options suggested to the China Study Group are being looked at carefully and other stakeholders in the situation have also given their inputs,” reports quoting sources said.

Options apart, the responses are quite interesting. After Army detected Red Army soldiers pitching tents and driving to this side of the LoAC, India responded by taking a posse of ITBP and Ladakh Scouts slightly nearer to the spot that is more than 10 km deep on this side of the un-demarcated MacMohan Line.

It was this very situation that even triggered a fierce reaction from J&K Chief Minister Omar Abdullah. “We would like the central government to take up this issue with both China and Pakistan strongly and on the same terms so that no such incident takes place in future,” Omar told a public meeting in Bani.

People of Jammu, Kashmir, Leh, Kargil and all other areas of the state, Omar said, have given sacrifices to protect and preserve the solidarity, harmony and brotherhood. “They want to be free from such intrusions and live in an atmosphere of calm and peace and carry on the day-to-day life activities smoothly and without any interference.”

As his statement did not make a difference in how New Delhi thinks differently for Islamabad and Beijing, Omar also jumped in to defend the status quo. “Can we please not link the Chinese incursion to tourism in the region. The Chinese troops are too far to bother any tourists coming to Leh,” Omar wrote on micro-blogging site Twitter. “When we use the words ‘Chinese troops’ and ‘tourists’ in the same sentence, we create doubts where none existed.”

Analysts believe China’s deep intrusion is a planned exercise to prick Delhi. Even the government is now taking pains to stress that it was “more of a tactical-level operation” rather than one with “any strategic intent”. Troops numbering around 30 pitched tents more than 10 km inside an un-demarcated LoAC came equipped with supplies for the long haul. They have also been detected to be using “one to three vehicles” between the face-off site and their tented camp around 500-metre towards the east.

The rival troops are actually positioned only 100 to 200 metre apart in the face-off site at Raki Nala in the Depsang Bulge area with 50-60 Indian troops from Ladakh Scouts and ITBP setting up their own camps towards the west.

“The PLA troops, who also have two sniffer dogs, have not exhibited any aggressive behaviour till now. We are keeping a close watch. If they increase their numbers, we will match them and examine other options,” said a defence source.

The Army has already suggested “five to six options”, including “a show of force”, if the matter comes to a head which can be implemented in a calibrated manner to “pressure” the PLA to leave the area. But the government is working for “a diplomatic, not military, solution as of now”, the sources added.

Defence experts are of the opinion that it normally requires around 2-3 kg of supplies and rations, apart from 5-6 litres of water to sustain a single soldier per day in the area which is at an altitude of around 16,300 feet. “The Chinese have already been there for 10 days and we have not yet detected any replenishment convoy or helicopter sortie. So, they came well-prepared to set up the camp,” said a source.

“The Chinese, equipped with assault rifles and other standard arms, are also using vehicles between the face-off site and their camp. The area is motorable,” he added. The entire 14 Corps (over 35,000 troops) deployed in Ladakh with an infantry division, a mountain division and an artillery brigade is, however, maintaining “a high state of operational readiness” to tackle any contingency.

Incidentally, in keeping with the government policy to treat the stand-off as “a localized affair”, an Indian military delegation is currently in China to finalize the dates for the third edition of the “Hand-in-Hand” (HiH) counter-terrorism exercise.

The Indian and Chinese armies had undertaken the first two HiH exercises in Kunming (China) in 2007 and Belgaum in 2008. But after China denied a proper visa to the then Northern Army commander Lt Gen BS Jaiswal in July 2010 on the ground that he was commanding forces in the “disputed and sensitive” region of J&K, all bilateral military engagements were frozen.

The incursion comes barely a fortnight ahead of Chinese Premier Li Keqiang’s visit. In fact, now India’s External Affairs minister Salman Khursheed will be flying to Beijing in anticipation of Li’s visit to sort out border issues.

But this is not for the first time that Chinese are in Ladakh against the wishes of the Indian Army. In last two years, PLA moved closer to LoAC, ‘almost controlled’ the entire Khak-jung area across Demchok, Fugtse, Dumtsele, Chushul, Spanggur, Phobrang and Hot Springs.

Last September, Chinese helicopters flew over Chumar with some of its troops even getting on to the ground. The troops destroyed bunkers and old tents of the Indian Army before returning to their own air space. PLA crossed over the LoAC near Demchok using bikes. They drove to Gombir, threatened an Indian contractor and ordered him to stop constructing a ‘passenger shed’. 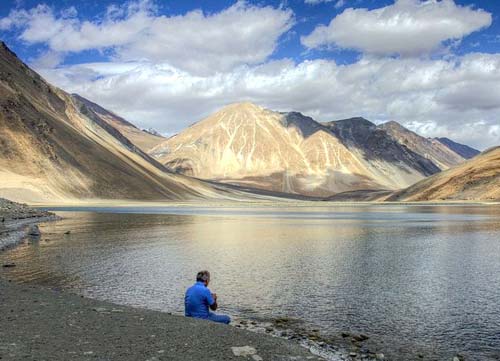 Even as the intruding Chinese soldiers refuse to budge from their position in Daulat Beg Oldie (DBO) sector in Ladakh since April 15, two Chinese military helicopters violated airspace at Chumar, several hundred km southeasts of Leh, adding to the prevailing tension. Reported on April 21, they hovered over the area for quite some time and returned after dropping some food cans, cigarette packets and notes written in their local language.

Chumar, which is about 300 km from Leh, provides another access to Aksai Chin, an area which is under presently under China, besides from DBO. DBO is a strategically important position from the Army’s point of view as this provides access to them in monitoring the activities of Chinese and Pakistani armies along the Karakoram Highway besides being an access point into Aksai Chin.

The flag meeting at Chushool offered some idea of the problems. While the Indian side represented by Brig BM Gupta appealed for maintaining the status quo ante, the Chinese side led by Senior Colonel Ayan Yanti raised objections to the construction of bunkers by India at Phuktsey area, 60 km from Leh, and wanted the structures to be demolished.

Unsettled border disputes are a major issue in Sino-India relations. While Beijing has managed to settle all border issues with Myanmar, Nepal, Pakistan, Afghanistan, Tajikistan, Kazakhstan, Kyrgyzstan, Russia, Mongolia, North Korea, Vietnam, and Laos, it is yet to happen with New Delhi. Beijing treats part of Pangong Lake, Damchok and Aksai Chin as disputed along with parts of Arunachal Pradesh. In the strategic 300 sq km Pangong Lake that falls on the eastern border of Ladakh, China is literally in control of the most of it and is using hi-tech boats for patrolling the lake that has roads on most of its banks.

Regarding Demchok, the ‘perceptions’ of both countries had been discussed in detail during the 1960 extensive border talks. At one point during the negotiations, Dr S Gopal, the head of the Historical Division, remarked that Demchok was the place where the ‘perceptions’ between the two sides were the closest. The Chinese side was not far from agreeing with the historical facts presented by India. Fifty years later, the closeness of the ‘perceptions’ seems to have been blown away by the wind at the high plateau. It is not a healthy situation: India has to constantly deny facts.

There is worse in the Eastern Sector. In 2007, it came out that China had moved 20 km into India and occupied areas including the Sumdorong Chu valley.

So, which way the wind is blowing this time?