When Indian Prime Minister Narendra Modi says people of Jammu and Kashmir have rejected bullet to choose the ballot, he is not mistaken. Safwat Zargar identifies few faces who contested elections after their tenure with arms and ammunitions 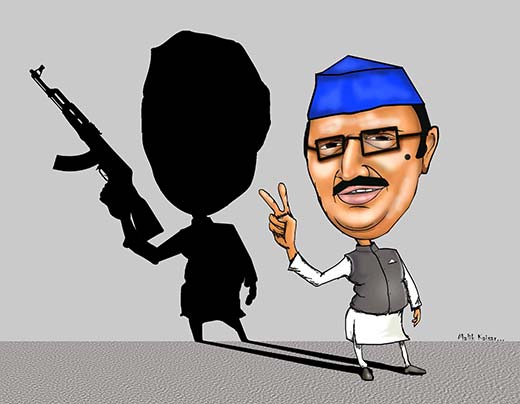 Twenty five years ago, Usman Abdul Majeed, a 28-year old Arts graduate from North Kashmir’s Bandipora district, decided to sail with the waves of armed resistance to fight Indian rule. Son of a Congress loyalist, he crossed over to Pakistan administered Kashmir for arms training in 1989 as a member of Students Liberation Front, student wing of pro-Independence Jammu and Kashmir Liberation Front (JKLF).

A year later, he was back. By 1992, he was head of Ikhwan-Ul-Muslimeen (Muslim Brotherhood) – that parted its way from JKLF and took a pro-Pakistan stand.

Known for “daring attitude” among pro-freedom armed ranks, for two years Usman ran a training camp on Line of Control and held a top position in United Jihad Council during early nineties. Months later, after his arrest, he became part of pro-India Ikhwan-Ul-Muslimoon, largest counter-insurgent group in the valley led by singer-turned-militant-turned-renegade leader-turned-pro-India politician Mohammad Yusuf Parray alias Kukka Parray. From being a lieutenant of Parray during notorious days of Ikhwan’s “rule” of “loot, plunder and killings” to joining its political wing Jammu and Kashmir Awami League (JKAL), Usman and many like him, are credited with ensuring “participation and conduction” of 1996 state assembly elections. Held six years after Governor’s rule was introduced in the state, it was Farooq Abdullah-led NC winning majority.

Usman and his patron Parray fought 1996 elections from Bandipora and Sonwari assembly seats respectively. Only Parray won. In 2002, Usman won his maiden victory from Bandipora, his patron Parray lost. With Kukka Parray gone and Awami League too, Usman contested 2008 elections as an independent, but felt short of victory by 820 votes. He joined Congress in 2009 and won 2014 elections on its mandate. The journey of a graduate-militant to a 4.56-crore worth MLA, Usman, who still has a criminal case pending against him, symbolizes the peculiar diversity of the electoral politics in Kashmir.

If shifting sides didn’t take Usman much time, it did take in case of Aijaz Ahmad Sheikh of Kangan Ganderbal, who fought 2014 elections on a Congress ticket. Sheikh, a former Pakistan trained militant, returned home after staying for a decade in Pakistan administered Kashmir. At the age of 17, Sheikh crossed LoC in 1995 and joined Hizbul Mujahideen. However, after staying there, he returned in 2005 after witnessing “a strange environment there [PaK].”

Starting life a new, he opened up a wholesale shop and started his business. Finally, he ended up working as a contractor before joining Indian National Congress in 2009.

“On my joining, when I met Sonia and Rahul Gandhi, they were moved after coming to know what I had gone through,” Sheikh says. “They were very happy.” 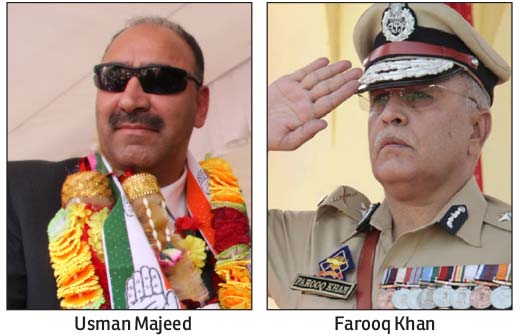 In the high-profile contest of Kangan between NC and PDP in 2014, Sheikh could only manage 889 votes in his kitty.

While joining militant groups in early days of armed struggle was not exceptional, many believe some of them had joined in order to “protect” their family members who had pro-India political affiliations. Experts opine since the cropping up of different armed groups on daily basis in 90s became a routine, they argue, it was one of the mechanisms of Indian intelligence machinery to destabilize the armed struggle.

In Hom Shali Bugh constituency of Kulgam district, in 2014, Congress had given mandate to Anayatulla Rather for the second time. Son of a former Congress leader Ghulam Hassan Rather, 43-year-old Anayatulla is a former “locally trained” Hizbul Mujahideen militant. In 2008 elections, Anayatulla ranked third with 14.38 per cent vote share in his favour. In his nomination papers, 10th class pass out of 1991, Anayatulla has mentioned “political worker” under the title of designation. In 2014, Anayatulla ranked third in the overall vote tally with 3822 votes.

On November 27, 2014, a joint protest of supporters of Peoples Democratic Party and other independent candidates from Sonwar assembly segment coalesced in front of DC Office Srinagar against Peoples Conference candidate from Sonwar, Lal Din Mir. According to the protestors, Lal Din Mir – found guilty by TADA court Jammu for his involvement in kidnapping the then Indian Oil Corporation executive director K. Doraiswamy by Ikhwan Ul Muslimeen militants in 1991 – had entered wrong information in his affidavit that no criminal case is pending against him.

Claiming that he was acquitted by the court in 2004, Mir says “like everyone else in 90s, he, too, was one of the sympathisers of the Azaadi struggle. I was in jail too but what is wrong with that. From Sheikh Abdullah to Hurriyat leaders, all of them have been in jails.” Also, Mir refuted ever picking up gun.

Worthy to mention, on August 20, 1991, the senior IOC official, Doraiswamy, after being held captive for 55 days by the group, was released in exchange of nine members of the group.

With its uncertainty and peculiarity apart, pro-India politics in Kashmir, has been absorbing ground for many “outcasts” in past as well. In 2008 elections, PDP’s candidate for Amira Kadal assembly seat Parvaiz Ahmad Bhat was a former militant. In Islamabad district, Liyakat Ali Khan, chief commander of J&K Ikhwan and vice-chairman of Kukka-Parray’s Awami League, unsuccessfully contested 2002 assembly polls. He again  fought 2008 elections as an independent but didn’t succeed.

Apparently impressed by the 71.28 per cent voting in the first phase of 2014 state assembly elections, Indian Prime Minister Narendra Modi during an election campaign rally in Jammu on November 28 said “For the first time, people of J&K have strengthened themselves. They have chosen the ballot and have given their reply to the bullets. I want to congratulate those voters of J&K who have voted in large numbers and made democracy victorious irrespective of the outcome.” While analysts were quick to point out the dangers of equating voting percentage with the larger question of J&K’s disputed identity, Modi was right, at least in case of those candidates, who, post-1990s, shifted sides and joined pro-Indian mainstream politics. 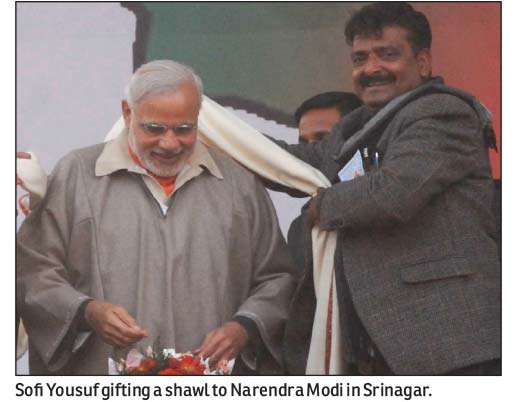 Entering politics had perks; an image of a civil unarmed man, security, money, access to power corridors and a chance to wipe the slate of “past”. For counter insurgents; it was a rebirth and an attempt to become “acceptable to society”, for ex-militants, changing sides served two purposes: a statement of “allegiance” to India after fighting against it and a tool for brushing the populous movement with rhetoric of “unemployment and frustration.”

Even though in most of the cases it is ex-militants and renegades who joined electoral politics, at several instances, former policemen also entered politics and fought elections.

From Srigufwara Islamabad, working as a constable in J&K Police, 47-year-old Yousuf joined Ikhwan during the time when counter-insurgents dominated the landscape in Kashmir. Surviving bids on his life, Yousuf suffered a bullet injury to his leg in one of the attacks on him. He fought his first election from Bijbehara when bye-elections were held in the constituency. In 2002, Yousuf’s ties with BJP cemented when the party gave him ticket to contest the elections. He was also Lok Sabha candidate for South Kashmir Lok Sabha seat in 2004. Yousuf unsuccessfully contested 2008 elections too and lost in 2014 from Pahalgam.

Being a pro Jamaat-e-Islami belt, Srigufwara and other surrounding areas, had witnessed “ruthless and notorious” reign of Ikhwan terror. Sources say, from being a son of an austere baker family, Yousuf is now the owner of property and landholdings worth crores of rupees. Moreover, allegations of encroachments and illegal constructions on river Lidder in famous tourist spot Pahalgam have also surfaced against him. Despite repeated complaints about the violations of law, officials seem helpless.  At present, Yousuf has one criminal case pending against him.

Unlike Yousuf, BJP has roped in several former militants who then switched sides and worked for Police and counter-insurgency groups.  Its Bandipora candidate, Abdul Rehman Thikhree was appointed as a Special Police Officer (SPO) in order to assist in counter insurgency operations. Similarly, BJP candidate for Kupwara, Abdul Rehman Lone worked in J&K police till 2006. Both Thikhree and Lone trace their past to Al-Barq, which was an armed wing of Late Abdul Gani Lone’s political party – Peoples Conference. Police records show both shifted their allegiances to Ikhwan groups and worked as “informers” for army. BJP candidate for Lolab, Abdul Rashid Zarger is not new to politics though. After remaining an active militant for years, Zarger ended up among Ikhwanis in mid 90s. With Ikhwan becoming less favourable for those who reared them, Zarger shifted to Special Task Force. Shuttling between Janata Dal and Congress for some time, he credits his “surrender and switching sides” to former police Chief Paramdeep Singh Gill (P S Gill), known for his role in crushing the armed resistance in the valley.

On December 23, when the results were out, the miniscule vote share in each candidate’s favour, hints at people having long memory of their “past.”