When defence ministry’s report regarding payoffs to unionist politicians reached state assembly everybody expected some action. But the way this sensitive matter was debated selectively raised more than just eyebrows. Shah Abbas argues that the original debate about army-politician nexus died down in the furore. 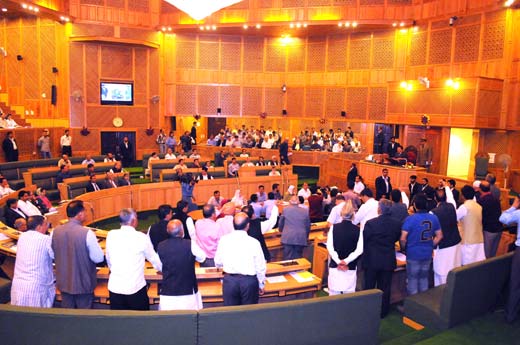 Although both the houses of the state legislature passed resolutions asking Centre to probe payoff charges levelled by former Army chief Gen V K Singh against Jammu and Kashmir unionist politicians, the Congress backed cabinet minister in the Omar cabinet, Ghulam Hassan Mir retained his berth even though the defence ministry report had alleged that he received Rs 1.19 crore from the army.

Interestingly, the issue rocked the state legislature a number of times but the Chief Minister left the fate of Mir to his voters. “I have not asked anything from Mir Sahab about the issue, he like all of us has to answer his voters.”

It was CPI (M) leader M Y Tarigami, who suggested the passing of a resolution, and Muzaffar Beig added “unanimously” to it. The agriculture minister, who according to the defence ministry report had received Rs 1.19 crores from army, was seated near his erstwhile political rival in Tangmarg, Dr Mustafa Kamal. Kamal did not spare Mir, and unequivocally demanded his resignation “if he has a moral courage”. Kamal hit at his favourite targets, Congress, centre and army. Probably feeling the heat chief minister, Omar Abdullah left the house for some time.

But it was PDP, which paved a safe passage for Mir. The party did demand for a probe in strongest words but its frontline leader and J&K former deputy chief minister, Muzaffar Hussain Beigh changed the discourse of the discussion during his speech in the legislative assembly. While speaking during the discussion, Beigh like an efficient lawyer, which he is, blamed VK Singh of demolishing the democratic institutions of the state. Beigh did not mention the defence ministry report which alleged the unionist leaders of taking secret funds from army since 1947 and named one among them.

“Mir’s name first surfaced in the story published about the defence ministry. VK Singh later reacted to the same story but the resolution was passed specifically against him and the defence ministry report which was not denied by the central government, was left untouched” a political commentator said.

Rashid Maqbool, a Srinagar based Journalist too looks at the issue from the same angle. “All the hue and cry made by the unionist politicians of the state on V K Singh’s revelations reduced the grave issue to a peculiar meaninglessness. VK Singh made the statement on the basis of a particular defence report, however, the way issue was boiled down to VK Singh as an individual it seems Ghulam Hassan Mir was tactfully absolved and given a safe passage,” he opines.

After Beigh’s powerful speech everybody held the same line of hitting VK Singh and leaving Ghulam Hassan Mir and defence ministry report untouched. Omar’s uncle Mustafa Kamal, and Independent lawmaker, Er Rashid were a bit different but they also did not mention the report in a comprehensive way.

Contrary to the past when they used to hit each other in the state assembly, Beig and Omar seemed comfortable with each other’s speech. Omar even complimented Beigh for his observation saying “it raised the standard of discussion.”

“The lawmakers should have tried to identify the politicians who are receiving secret funds from the army according to the defence ministry report, leaked in a national newspaper, they instead targeted VK Singh who issued contrary statements on the matter,” said a political commentator, adding, “The lawmakers perhaps could not gather courage to talk about the report!”

“In my opinion Gen Singh has been punished for telling the truth mentioned by a report of a responsible institution of Indian State and the alleged culprits were shielded behind the whole fake ruckus aimed at Gen Singh. This makes one skeptical,” Maqbool said.

A story about the defence ministry report was carried by a national level newspaper in mid September and meaningfully the same was not refuted by the concerned ministry.

Many legal experts believe that legislative assembly of any state has not the jurisdiction to discuss the matters pertaining to the defence and external affairs ministries.

A noted lawyer and Panthers party chief patron Professor Bhim Singh too is of the opinion that no assembly can discuss subjects concerning Defence and Foreign Affairs.

“Nobody could raise a point of order against the subjects concerning Defence, Foreign Affairs etc. the matters relating to such national level can’t be discussed in a state assembly,” Bhim Singh said in a statement.

But a columnist has a point to make. “When assembly was discussing the statements of VK Singh, they talked only about army and its role in secret funding without mentioning the defence ministry. The resolution to probe the allegations also pertained to the defence ministry. So if the lawmakers deliberately bypassed the defence ministry because they have no jurisdiction, they proved themselves a bit over smart.”

How will central government respond to the resolution passed by the state legislature, is a question to be answered later but fact of the matter is that agriculture minister, Ghulam Hassan Mir emerged as victorious as his portfolio remained intact despite being named in the defence ministry report receiving secret funds.

It is probably the second most important resolution ever passed by the state legislature.

On June 26, 2000, the state assembly passed a resolution urging the central government to restore greater autonomy to Jammu And Kashmir State. This resolution then had created a lot of political excitement in Srinagar and New Delhi.

But this time the excitement was missing and helplessness was very much evident on the faces of legislators, who clearly indicated that they were keen in restoration of the prestige of the house than autonomy of the state.

In 2000, autonomy resolution was passed with the ruling National Conference (NC) having two-third majority and amid protests by then opposition Congress, BJP and Panthers Party.

On the contrary, NC was this time enjoying the support of its arch rival, Peoples Democratic Party (PDP) and coalition ally, Congress.

But National Panthers Party (NPP) looks the matter from another angle. The party chief patron, Professor Bhim Singh called the discussion on the army funding and resolution against Singh as “sad”.

“This is so sad that assembly had two days out of six only for former army General VK Singh because the Chief Minister found a safe platform to condemn the Indian Army and exposed the secret working of the army,” Bhim said in a statement.

But it remains a fact that in the recently concluded session of Jammu and Kashmir legislature by reducing the debate of army funding to a retired general, New Delhi, army and the state agriculture minister were whisked away from the trouble scene and thus saved the embarrassment.

Like Rashid Maqbool, many commentators opine that besides summoning Gen Singh to the assembly, the defence report should have also been questioned and debated by the legislators and they should have sent a strong message to centre to come clean on the issue.

They said, “Had the legislatures taken a strong note of the defence ministry report, a clear message would have gone to New Delhi that Kashmiris are not like commodities on sale.”

The PDP president, Mehbooba Mufti while initiating the discussion on VK Singh revelations favoured self introspection to show the New Delhi establishment that “we are not bikao”.

But it was in the upper house of the state legislature where her party was reportedly alleged as “bikao” by a National Conference member, Bashir Veeri.

“Rs 15 lakh were paid to political operatives from South Kashmir by one of the intelligence agencies,” revealed Bashir, clearly indicating towards PDP.

It was also revealed in the same house by a Congress member that Hassan Mir, just after the VK Singh revelations offered his resignation to the party’s state president, Prof Saif-ul-din Soz but he rejected the same saying “let the law take its own course.”