Two and half decades of conflict inspired many youngsters to take art as a medium of expression. Two youngsters from Srinagar are redefining traditional cashmere designs by using images of conflict to present Kashmiri art in a different way. Bilal Handoo profiles the duo and their novel designs.

It was their common love for creative art which brought two youth from Srinagar together. One had just returned from Harvard to her hometown to pick up the threads of ‘dying’ Kashmiri artistry and another had just finished his graduation in Fine Arts in Srinagar, and was trying to give novel touch to his art. As their ways intersected, Mahum Shabir and Mir Suhail (both in their mid-twenties) started creating fresh designs on cashmere to rejuvenate it and to make it relevant for the global customers.

Mahum graduated from Harvard College, USA in 2011, having studied Government and Visual, Environmental Studies. Deeply passionate about the arts, she intern with paper-machie artisans in Kashmir prior to attending college.

“The incredible skill of the artisans,” Mahum says, “the rich heritage of craft in Kashmir and the massive challenge faced by artisans working in an unorganised sector prompted me to start this enterprise after graduating.”

The other face of the joint venture, Mir Suhail, is a young artist and a known cartoonist of the Valley. Ten years of experience in creative art has won him many national and international awards.

“I am working to capture artistic freedom forgotten during conflict through the medium offered by the weave,” Suhail says.

Having graduated with a degree in Fine Arts, he believes that progressive design practices are marked by a focus on sustainability and continuous innovation. He hopes to communicate this in his work.

“When I graduated from college, I had a different concept of art,” Suhail says, “and once I stepped out of college, I noticed that we have our own established canvas in the form of Kashmiri handicraft, where creative interventions can produce amazing results.”

The people connected with cashmere industry are creating the floral patterns and designs on shawls and scarves for many centuries now, but the duo doesn’t want to repeat the same.

Much to the surprise of the established players in handicraft industry in Kashmir and that of outsiders, Mahum, the owner and Suhail, the director of Crafted in Kashmir (a joint venture of duo), are focussing to create situational designs on scarves and shawls.

“Most of the artists are still creating lovely picture of the Valley on cashmere,” Mahum says, “but hardly anybody seem motivated to design situational patterns of Kashmir.”

The duo says that designing situation on cashmere is the truism of today’s Kashmir: “One can’t go on selling Pashmina and other Kashmiri stuffs with designs of nature when other realities have overtaken Kashmir,” Mahum says.

Artisans of pre-nineties era, they explain, were drawing design inspirations from “nature” which wasn’t put at “assault”.

“But the picture of Kashmir changed completely post-nineties,” Mahum says, “I mean when we were growing up; heavy security apparatus, cross-firing, crackdowns, bunkers and barbwires overtook the Valley. All these things collectively shaped our mindsets, ruled our imaginations and affected our overall mentality. Therefore, we are only depicting our inspiration by creating situational designs.”

Besides, they are also making use of painting in designs as well.

But it is not mere situational designs which make the venture of duo different from others. Their initiative also aims at “visualising the invisible” artisans, who as per them remain buried in obscurity.

“Weaving Pashmina is the labour of love,” Mahum says, “So we want to retain the meaningfulness of art at the same time by highlighting the contributions of our artisans, apart from bringing cultural and social intervention in the craft.”

Suhail says that an artisan takes three months to make a single shawl. “We are looking into the positions of artisans in real terms,” he says. “We want to raise their income by 100 percent.”

Both of them are harbouring a vision to tell the story of artisans, so that they start taking “pride” in what they are doing.

“Like in my case, my mother often tells me to prepare for civil services, as if I do nothing. In a way, she is also targeting my sense of pride,” Mahum says, “and with public apathy and peanut income in the offering, somehow artisans aren’t taking pride in whatever they are doing. So we want to support them, so that, they would start taking pride in their work.”

They are working with a Chinar Weavers Society, a group of 50 artisans located in over three villages in the Mir Gund region of north Kashmir. The weavers, mostly men, practice the art of ‘kani’ weaving which they learnt from their parents. The duo urges artisan communities to organise in small workshops so that coordination and monitoring costs are reduced and work culture motivated by excellence created. “We also run workshops outside this society,” Mahum says.

Besides, the duo is working with Kashmir Women Spinners Group, a group of Kashmiri women, who practice the art of hand spinning cashmere.

Many artisans in Kashmir believe that existing middlemen in the industry don’t trickle down the larger benefit to them. The duo claims to emancipate artisans from this decade old menace.

According to capitalism, Mahum says, people should be paid as per their skills. “Not only we want to give them proper recognition, we also want to provide larger benefit to them by engaging them directly,” Mahum says.

Suhail says everybody in Kashmir was artists, who have now become labourers.

“Let me tell you, not everyone can run brush or artistic sticks. One needs proper training for that,” Mahum says. “Artisans have an intimate experience with softness and nature of cashmere. So underpaying them is biggest disservice to their art.”

Right now, the duo is only concentrating on Kashmiri Pashmina. They create designs and then passed it on the artisans. Mumbai and United Kingdom are two destinations where they send their prepared products.

“But we want to make it sure to take inputs from artisans as well,” Suhail says. “In a way we encourage artisans to intervene in designs. We believe everybody is equal in producing a product.”

Mahum hopes to elevate Kashmiri craftsmanship to the next level “for the most discerning customers of the world’s best stores” while generating livelihoods for artisan communities, “especially women, in the rural areas of Kashmir”.

“When you step inside the best stores in the world, Kashmiri product is nowhere,” she says. “Our aim is to take our product to world’s best stores under Kashmiri brand.”

Unlike in many developed nations, where designing and manufacturing are being done by different partners connected with the venture, the duo wants to design as well as create cashmere themselves. “Why should others create our intellectual designs,” Mahum says.

“Here is the chance for us to tell our own narrative,” she says. 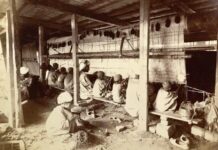 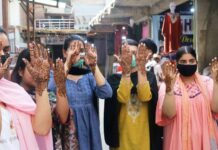