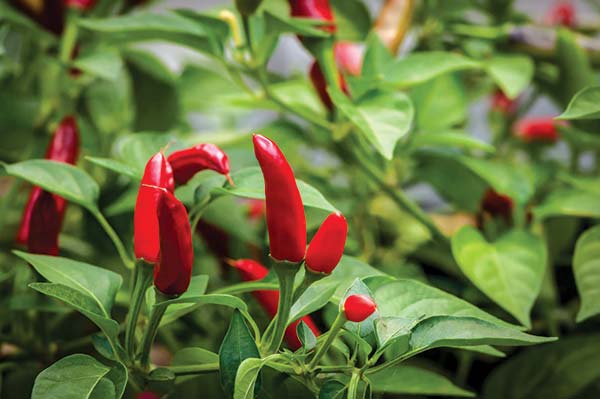 Sanaullah Ganai, 51, is a stocky man with tenacity even men half of his age will envy. A farmer from Ganderbal, he grows a variety of lentils at his 5 kanals of farm besides cultivating collard greens, onions, turnips and other vegetables. The inventory, to his displeasure, is one item lesser than what he cultivated once.

Decades ago, Kashmiri red chilies adored his sprawling vegetable farm. The indigenous chili famous worldwide for its idiomatic taste and color was one of the prized crops his farm produced. A Kashmiri Waza will not cook until his preparation is tinged with tablespoons of Kashmiri chili.

But over the years, the production of Kashmiri chili has registered a deep slump. The dearth stemmed in part from the prolific conversion of farm land into residential areas and, in part, from a deadly disease called Fusarium wilt.

By 1980’s, wilt destroyed most of the chili cultivations by creeping over its stem and leaves, rendering them inedible. Farmers winced with agony at the sight of wilted plants which they had so lovingly raised. Consequently, they abandoned the chili cultivation. Many of them scouted alternatives like introduced and hybrid varieties of chilies that now dominate the market.

“It comes at time of transplantation, vegetative growth, flowering and even fruit ripening.”

Kashmiri chili grows across the length and breadth of Valley. It did not have the niche area like Kawdara greens and Sagam mushkbudji. Although, chilies cultivated in Pampore town in South Kashmir, farmers say, were extremely famous among buyers. “It grew across whole Pampore town,” says GhulamNabi, former grower and currently a government employee.

“During harvest seasons, we would assemble with all the agricultural produce mainly maize, chilies and rice at a nearby land which has become a football ground today,” he recalls in retrospect. “It was revelry. People threshed rice, littered the chilies onto a spread sheet to let them dry and collect the corn cobs.”

In fact, chili cultivation was so embedded in their culture locals would amass the excrement in their conventional lavatories and powder it with Kangri ashes. The collection was then carted away by the grower who fed it to the soil as manure.

“In return he offered us kilos of Red chilies lasting for a year,” he chuckles.

In present scenario, the chili cultivation is sparse. Only across few isolated pockets in North and South are these chilies grown. “In fact, the current spice sold under the name of Kashmiri chili is in reality a hybrid version,” a seller tells Kashmir Life, wishing not to be identified.

For, MushtaqBeigh, a farmer from Kupwara, the culprit is invariably the Agriculture department. “We never see the officers in fields,” he says. “They are confined to office. Had it not been the scientists of Shalimar University, we would have been starved to death.”

Beigh used to grow chili on two kanals of his land in his village. He produced up to 20 kilos of chili annually.

In his neighborhood, as many as 20 households cultivated this crop but all of them abandoned it following wilt infestation even though Beigh still grows it. He has employed a novel technique of spreading out a tarpaulin over the saplings when they blossom. “It ensured that they crop yielded copiously,” he says.

In Kulgam, Farooq Ahmad, rues how the chili vanished from their farmlands in wake of government apathy. “Had they timely hammered out the effective way of dealing with the wilt, we would not have to part ways with the indigenous chili,” he says.

Three years ago, Division of Vegetable Science at SKUAST-K in Shalimar rolled out its plans to revive the near-dying indigenous chili. The varsity is hoping to install measures aimed at quelling the likelihood of wilt infestation. “In fact, it isn’t just one disease,” Prof Jabeen says. “My research shows that the cultivations contracted disease complexes which were actually soil borne.”

Conducive conditions for the wilt are reached when too much water-logging occurs in the soil. It would have required a large scale sterilization of soil to keep the disease at bay which is practically a near-impossible task. Farmers, as a result, incurred losses up to 70 to 80 per cent. With returns diminishing, they decided against raising the crop.

“Then the University somewhere in 90’s released a variety known as Kashmir Long 1,” Jabeen says. “This variety is tolerant to this disease, if not resistant.”

With the outset of this research in 2013, the varsity collected samples from different parts of Kashmir valley to obtain the most pure and original form of Kashmiri chili. “I was not acquainted with the characteristics of this chili myself,” Prof Jabeen says. “So I had to take along the farmer who knew how it looked like.”

The team collected more than 30 specimens out of which only two were found out to be authentic Kashmiri chili.

“A chili has these two key principles: Pungency and Colour,” she explains. “People liked Kashmiri chili because it is being sold in international market in the name of Kashmir. Its color is more intense while pungency is less.”

The chili is increasingly preferred for Wazwan to bring about rich colour and preferable piquancy.

This quality, experts say, is innate. Besides, climatic factors also play their part. Kashmir is a temperate region where mercury does not rise as swiftly as it does down South in India. “Chilies are cultivated in Southern India have more pungency because of high temperatures,” she says.

After identifying the native chilies, the SKUAST-K team started chemical analysis for pungency and color. They would not have ran into this problem had hybrid varieties not flooded the farmlands of Kashmir.  “A lot of foreign varieties have cross pollinated with the indigenous variety,” Jabeen says. “It would have been very difficult for a farmer to isolate the native from the foreign.”

SKUAST does not intend to make any genetic intervention, for; in that case, the chili would lose its individuality. They are, instead, developing a package for farmers enabling them withstand the wilt disease.

The package includes educating growers on a range of methods and providing them the necessary fungicides meant to stave off the disease complex.

“For instance we will impart the knowhow about the raised bed method as against the flat-bed,” Jabeen says. “The latter often leads to water logging giving rise to conditions conducive for wilt development.”

The growers are also supposed to withdraw the irrigations at certain period of time and administer the fungicides at prescribed times.  “That the farmers didn’t follow the steps earlier is also the reason that the wilt could dominate,” she says.

The SKUAST-K hopes to develop seeds in bulk and give it to the farmers. In fact, by the end of this year, they are expecting to produce a seed base of about 30-40 kgs. “Once we do that, then it becomes the mandate of Agriculture department to ensure that the crop further propagates,” she says.”

The varsity, once revival fully achieved, will also obtain a Geographical Indicator (GI) for the Kashmiri chili enabling sellers to market the produce in the name of Kashmir.