As the parents felt the crisis in schooling their deaf and dumb son in Bandipore, they migrated to Srinagar. Almost two decades later, the decision helped them succeed in their endeavour of converting disability of their son into a distinction they wear on their hats, reports Faheem Mir 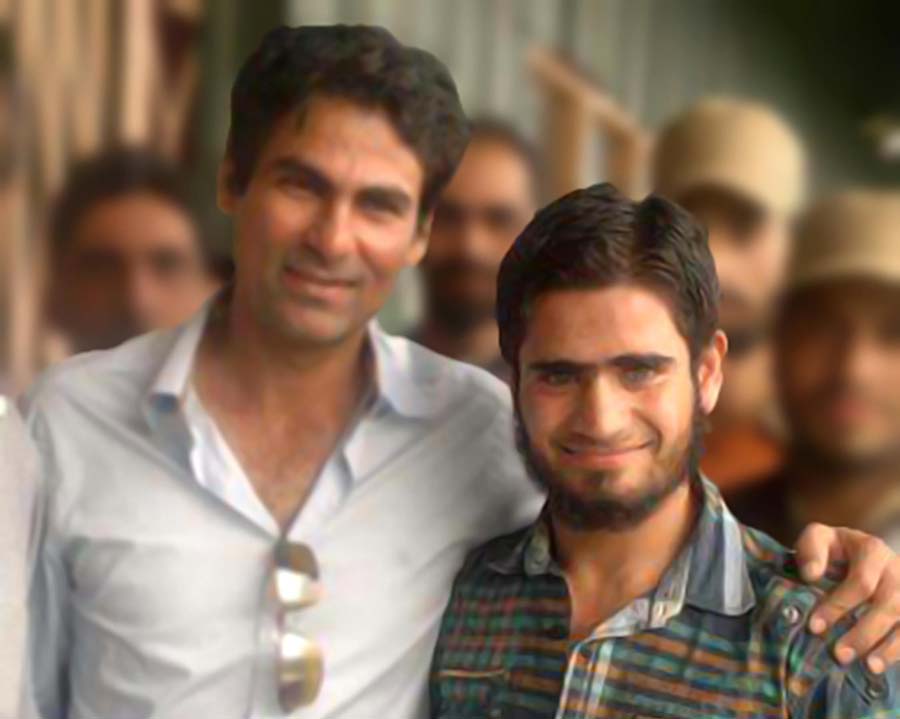 Abdul Rouf Gurgani, 52, and Zeenat Rouf, 43, live in Bemina’s Madina Colony. Basically hailing from Bandipora, they are migrants to this locality. But what makes them distinct is their son. They are the proud parents of specially-abled athlete Aamir Rouf, 24.

Aamir was born deaf and dumb but he never saw his disability to come in the way of his growth, both as a human and as an athlete. He started participating in Taekwondo championships in an early childhood. Now he is doing wonders.

“I am very happy when I see my name in newspapers,” Aamir told this reporter through his younger sister Rabiya Rauf. She has picked up the sign lingo from his brother and helps him communicate with others. Their room is stuffed with newspapers that have detailed copies printed on his accomplishments. The walls and the showcases have a series of awards and trophies that Aamir has earned.

Blue-eyed Aamir is the eldest of three siblings including Rabiya, 22, and Rafiya, 20. He had his schooling at the Deaf and Dumb School Rambagh. “After completing his tenth standard, he joined SP Higher Secondary School and passed his twelfth class there,” Zeenat, his homemaker mother, said. “It was hard for Aamir to get an education from a normal school sitting with normal students in the classroom and learn new things. It was just his passion for learning that helped him manage his studies and pass the twelfth standard examination.”

Later, he did six months course, the Auto CADD from Kashmir Government Polytechnic, Srinagar that helped him to get the job, Rafiya said.

Now, Aamir is a daily wage computer operator with the state-run Cable Car Corporation and is deployed in Gulmarg Gondola. He has been working there since 2013.

“Aamir started showing interest in Taekwondo when he was barely of two years of age,” Abdul Rauf, his father said. “He is keen on many other games too.” This helped Aamir to represent the state of Jammu & Kashmir and later India in the deaf and mute cricket team. He participated in deaf and mute IPL 2014 in Jhalander (Punjab).

Besides, Aamir represented Jammu and Kashmir in cricket, volleyball, chess, and skiing in Gulmarg, Kolkata, Punjab, Delhi, Hyderabad and in Bangalore. Right now, he is preparing to participate in winter games of 2019 skiing competition to be held in Turkey.

“One has to be very honest, dedicated and punctual,” Aamir wrote on his laptop while “talking” with this reporter. Aamir is smart enough to chat with friends and family on social networking sites. “He learned to write English in his school,” Rouf said. “Now he is perfecting his language and is up-to-date with technology.”

The family credits the new technology as this helps them to be connected with their son when they ordinarily would require his physical presence to ensure his well being. “We are now used to stay connected with him through WhatsApp and Facebook and we do video calling to see him when he is out,” Rafiya said.

Asked about how he spends his holidays, Aamir – talking through his sister, said, his Sunday is spent in the company of his specially-abled friends. “I like to play cricket with my friends and help my mother in the kitchen in the spare time,” he said.

The family said Aamir gets irritated when people around him ignore his presence. “We have to communicate with him all the time otherwise he gets upset” recalls Zeenat.

More than 30 trophies with dozens of participation certificates and a good number of newspaper cuttings in Aamir’s room show his achievements. “I got top position in 2016 Gulmarg winter games in skiing as well,” Aamir said.

His interest in sports has made Aamir a traveller. In last few years, Aamir visited many states in India to participate in different games and competitions. “Aamir loves to travel,” Zeenat said. “But travelling is not easy for him as the situation in Kashmir is not so good.” His father said that the commuters are sally asked across Kashmir to prove their identity. “It gives tough time to my son to communicate,” Rouf said.

Unlike his father, Aamir does not regret his state of health. “I know I am not able to speak and hear but it is Allah’s mercy and his blessings that he gave me enough strength to cope up with these disabilities,” Aamir said.  “My family always supported me.”

At personal level being an achiever, Aamir feels for his friends. “Some of my friends dropped the school after fifth and eighth classes due to poverty,” Aamir said. “They are now working hard to survive. I feel for them.”

Explaining this crisis, Rauf said it is a Herculean task to give education to children like Aamir. “We had to drop Aamir in his school in the morning and then receive him in the evenings for eight continuous years on regular basis,” Rauf said.  “Educating specially-abled children is expensive and is literally impossible for many parents.”

Having the experience of raising a child and help him succeed, Rauf suggests that the government must open schools for specially-abled children in all district which must have hostel facilities. “How will people living in rural areas come to Srinagar and get their wards admitted to the special school at Rambagh,” Zeenat asked.