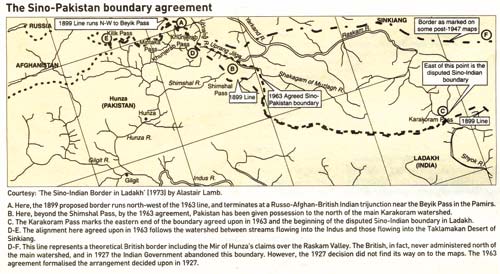 The Treaty of Amritsar that created J&K state did not identify its northern and eastern borders. Raja Gulab Singh who received this State was already Prince of Jammu which included Ladakh and Baltistan and Jammu was itself part of Lahore Sikh State. Kashmir, then, was an administrative Province of Lahore. In order to weaken Lahore State the British cut off Jammu State and Kashmir Province from it through Articles 4 and 12 of the March 9, 1846 Treaty of Lahore. They transferred these into “independent possession” (independently of Lahore state and not British) of Gulab Singh on March 16.

British lacked an idea about what the position was north and east of river Indus. Article 2 of the Treaty of Amritsar therefore stated: “The eastern boundary of the tract transferred by the foregoing article to Maharaja Gulab Singh shall be laid down by commissioners appointed by the British Government and Maharaja Gulab Singh respectively, for that purpose, and shall be defined in a separate engagement after survey.”

The actual position north of the Indus was that Gilgit proper was ruled on behalf of Lahore State by Sayyid Nathu Shah, the Punjabi Muslim Commander of Lahore Sikh Forces. Around Gilgit, up to Karakoram mountain ranges, beyond which lay Chinese / Eastern Turkistan, there were independent states of Hunza, Nagar, Punial, Ishkuman, and Yasin. Subsequent to the Treaty and to the forcible occupation, with British assistance, of Kashmir Valley by Gulab Singh in November 1846, Nathu Shah changed allegiance to Maharaja Gulab Singh. So Gilgit also came under his rule despite its exclusion in the Treaty. Of the hill states located north of Gilgit, Hunza was strategically the most important as it commanded Mintaka, Khunjerab, and Shimshal passes which led into Eastern Turkistan.

The position in Baltistan and Ladakh was that Gulab Singh ruled on both sides of the Indus. However, there was no clearly demarcated boundary between Ladakh province of former Jammu State on the one hand and Eastern Turkistan and Tibet on the other hand.

In 1852 the people of Gilgit rose in rebellion against Dogra occupation under the command of Gaur Abdur Rehman, Raja of Yasin, and annihilated them to a man. Gilgit was liberated.

Gulab Singh did not try to retake Gilgit. His sway now extended up to the eastward side of the river Indus where Bunji became his main army base. Ranbir Singh succeeded his father in February 1857. He wished to set up independent trade relations with Eastern Turkistan and Afghanistan, and to pursue an independent foreign policy. With these designs in view he sent his army across Indus in 1860 to bring Gilgit under his control. Gilgit was the nerve centre of the trans-Indus region from where Chilas, Hunza, and Chitral were accessible. Equipped with modern weaponry and tacit British support, Dogras recaptured Gilgit in 1860.

Across the Karakoram, Muslims of Eastern Turkistan rose up in rebellion in 1861 against Chinese Manchu rulers. They pillaged Chinese populated cities and massacred them. When this insurrection spread throughout Eastern Turkistan, Buzurg Khan an adventurer returned from exile in the Western Turkistan Khanate of Khokand in January 1865 with his protégé Yaqub Beg in tow.

When Khan and Beg crossed the Pamir mountains (separating Western from Eastern Turkistan) to Kashgar they found it in utter turmoil. Rebels were fighting Chinese and also within. Within two years Beg wrested Kashgar and Yarkand from Chinese as well as from rebels and installed his patron Khan as the King of Kashgaria. In 1868 Beg pushed aside Khan and crowned himself the King with Kashgar as its capital. Soon he brought whole of Eastern Turkistan under his firm control

Taking advantage of the unrest and political uncertainty in Eastern Turkistan Ranbir Singh dispatched in 1864 a small force across Karakoram Pass sixty miles inside to Shahidullah/Xaidulla located on Leh-Kashgar caravan route and set up a military post. Then, British surveyor W H Johnson showed the north-eastern frontier of J&K on official British Indian maps some hundred miles away into the trans-Karakoram region. This measure extended J&K by some 21000 square miles of territory including Aksai Chin wasteland.

When British authorities in Calcutta came to know about this new development they were annoyed with Surveyor Johnson as well as with Ranbir Singh. They perceived that the Maharaja was playing foul with Treaty of Amritsar and British sovereignty because he had executed independent foreign policy and independent military ventures. Article 4 of the Treaty prevented any change in territorial limits of Gulab Singh without British concurrence. So they made clear to Ranbir Singh that they did not accept the new boundary. Also they placed an Agent, Henry Caylay, at Leh in 1867 to keep an eye on what was going on across Karakoram. Ranbir Singh’s Shahidullah / Xaidulla garrison abandoned the post in 1868.

After bringing Gilgit under control in 1860, Maharaja’s troops had extended his authority to various Principalities of Gilgit including Chilas, Darel, Nagar, Yasin, Punial, Ishkuman, and Astor. They reduced Hunza, the most important of these Principalities into some sort of tributary relationship with J&K. Hunza, however, continued its tributary relationship with Eastern Turkistan also because this relationship gave the ruler, Mir of Hunza, cultivation and grazing rights in Raskam across Karakoram.

In 1877, Beg of Kashgaria died. In 1878 Chinese recaptured Kashgar. In 1884 the Chinese empire incorporated Eastern Turkistan as a province of China. They named it Sinkiang / Xinxiang.

In the absence of any alternative, the 1864-Johnson map of eastern Karakoram continued to influence British Indian maps for many years.

Meanwhile across the Pamirs, Russian Tsarist Empire started its advance into Western Turkistan in 1865 by taking first the city of Tashkent which was part of the Khanate of Khokand. In a matter of a decade the Russians subjugated the whole of Western Turkistan thereby pushing their frontier close to the northern frontiers (Gilgit Area) of British Empire.

From British strategic point of view, the British imperial interests in India were now threatened more in Gilgit area than in Ladakh. So in 1877 they established their Agency at Gilgit, under Major J Biddulph, for surveillance of the Mintaka, Khunjarab, and Shimshal passes against the incursion of Russian agents. This was part of the Great Game which the British and the Russian agents played to outsmart each other in high Asia.

In 1888, Srinagar durbar (Pratap Singh assumed power in 1885) put a proposal to India’s British government to reoccupy Shahidullah post in order to protect the Leh-Kashgar Caravan Route from marauding bands. The plan was rejected because this would result in unnecessary argumentations with the Chinese authorities in Sinkinag. At that point of time they were more concerned about the Gilgit area. The plan was rejected again in 1892.

In 1899, the British India government communicated a Note to Chinese Government in Peking on March 14 proposing a boundary between their respective areas of influence across Karakoram – between J&K on one side and Sinkiang and Tibet on the other side. Then, Tibet was ruled by Dalai Lama under Chinese supremacy. On Ladakh side, the Note proposed a border which put Aksai Chin wasteland on the Chinese side. The border mainly ran along the Karakoram watershed (mountain ridgeline separating waters of two river basins).

In the Note, the British proposed to the Chinese government that they should give up their “shadowy claims to suzerainty over the State of Kanjut (Hunza)” and the British Indian Government will, on behalf of Kanjut (Hunza), give up her claims to cultivation and grazing rights in the Raskam districts across Karakoram. The Chinese Foreign Office neither rejected nor accepted it. In 1905, at the orders of Gilgit Agent, the Mir of Hunza stopped the cultivation of Raskam districts. 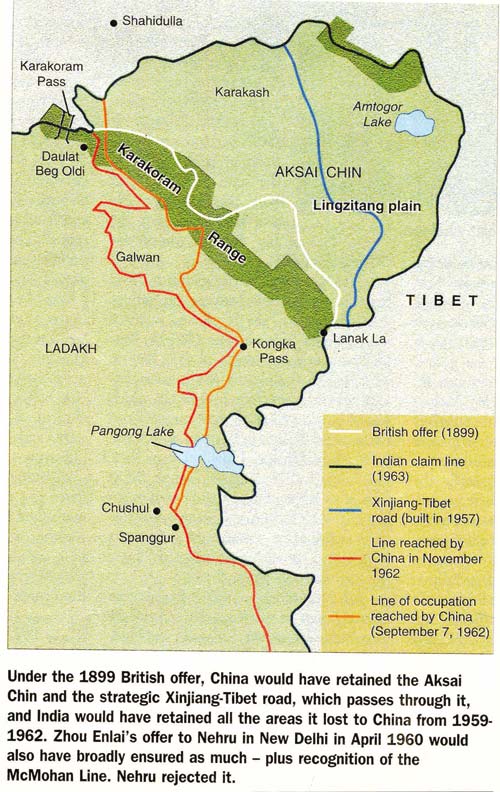 In October 1913 during negotiations between the British, the Tibetan and the Chinese at Simla, the British introduced a map which showed Aksai Chin inside Tibet. The Chinese delegate put his signatures on the map but then he was disowned by his own Government in Peking. So the map lacked any legality. Simultaneous to doctoring with maps the British prompted the Mir of Hunza to resume cultivation in Raskam. So the border between China and the Princely J&K ran, in the eyes of British India, along the 1899 Line. In 1936 the British Agent at Gilgit directed the Mir of Hunza to stop payment of annual tribute to Chinese authorities at Kashgar. In exchange for loosing his cultivation and grazing rights on the Chinese side of Karakoram the British Agent granted him an annual compensation of Rs 3000 and a fief (jagir) of 312 acres in Gilgit Agency. In all this the Maharaja of Kashmir was never consulted.

During the World War II, (1939-45), British, Chinese and the Russians became allies against Germany and Japan. It was a time, when, if the British had taken a serious initiative to resolve the border issue with Sinkiang authorities from Gilgit Agency to Ladakh they would have managed to negotiate a permanent border. But they were too busy to address a ‘minor’ issue. As it was, the official British maps of the time did not show any boundary at all in the region between the princely J&K on one hand and Sinkiang and Tibet on the other. Instead of a boundary, the maps showed a simple word “undefined”. Partition of British India followed by the partition of the princely J&K created new successors to the British Government of India along the Karakoram frontier – Pakistan in Hunza and (post-Partition) India in Leh.

So the Chinese authorities in Sinkiang would have to negotiate with two mutually hostile countries if they wanted to settle the border issue along the Karakoram. In 1954, Delhi published a map which showed Aksai Chin inside J&K and the entire (former princely) State inside (post-Partition) India. Perhaps they had no idea that the People’s Republic of China had constructed a highway through Aksai Chin wasteland linking Sinkiang and Tibet. They came to know about the existence of this road when in 1957 a Chinese magazine showed it in a map of the area.

In 1959 Nehru wrote on September 26 to Prime Minister Chou Enlai that the British Indian Government’s Note of 1899 described Aksai Chin as part of the former princely J&K. Thus he “committed” his Government to 1899 Boundary Line that actually had shown Aksai Shin as part of Sinkiang.

Meanwhile China made a claim to Hunza. Reacting to their claim Ayub warned the Chinese on October 23, 1959 that if they encroached upon J&K territory in Hunza they would be expelled with all the force at his command. At the same time he told them that negotiating a border would be better than imposing one by force. The Chinese promptly responded. Negotiations between the two sides revolved around the 1899 Line. In 1962, as a prelude to getting the 1899 Line recognized by Pakistan, China invaded India in Ladakh sector to impose the same Line upon India by force. On March 3, 1963, China and Pakistan signed an agreement on boundary issue in accordance with 1899 Line whereof China gave up its claims on Hunza. The Agreement recognizes Pakistan’s right to delimit the boundary to be only provisional. Furthermore it had a clause that as and when the Kashmir Dispute would be resolved talks on the border issue would be reopened.