A small shrine nested in Kashmir’s Pir Panchal Mountains in Shahadra Sharief funded a huge university in Rajouri’s backyard. The Ghulam Shah Badshah University is now generating ten times more funds that the shrine still pays it per year. How a better managed shrine with not more than a million visitors a year can bring about such a Himalayan change will always be a lead model for converting ‘faith capital’ into a larger good, R S Gull finds out 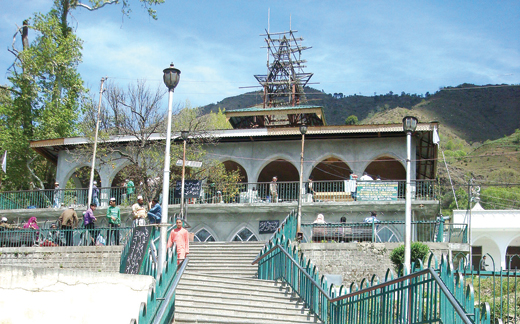 It is scorching summer noon in Shahadra Sharief, a rugged village scattered on the Pir Panchal Mountains in south Kashmir’s Rajouri district. An aged Gujjar carrying almost 50 kg of fuel-wood is sweating under his head-load. As he ascends the staircase, he pauses, slowly, paving way for the devotees leaving the shrine. He takes his own time to climb the long steep stony staircase to reach the top where the shrine and its managers stay. He goes directly to the custodians and unloads himself.

An old lady is waiting for her turn in front of a middle aged, bearded, well-dressed man, the custodian of the shrine, who sits on a veranda, not far away from the evergreen trees that the saint is believed to have planted in the shrine complex. These plants bear fruits round the year. The man accepts donations and studiously issues receipts. The old lady is carrying a hen. As she watches the sweating old man approaching, she paves way for him. The custodians issue him a receipt. Now is the turn of the lady whose bird is weighed and is properly documented in the books. With receipts in their hands, they leave for the shrine’s sanctum sanctorum where an Imam recites fateh for the saint. Their ziyarat is over. They have made their day.

Compared to the shrines in Kashmir, Delhi or Ajmer, this may sound strange. There is not a single “respectable” mujawirs or khadim chasing the devotees. Nobody is seeking anything from anybody. There is no beggar and not a square inch of unclean floor. Instead, one can go to the kitchen, quench thirst, have tea and bread, and can even take part of the bread home, a tabaruk. There is absolutely no possibility of finding devotees laying prostrate before the grave or shouting their prayers. The calm of the shrine magnifies the majesty of the saints abode.

“We have a set system here that nobody can flout,” said Faqir Mohammad, a former Assistant Commissioner who, post retirement, was appointed as the administrator of the Auqaf of Shahadra Sharief shrine. He operates from an office that is literally stuffed with used receipt books and hug cash registers with at least three persons working and managing them. “Every penny is accounted for and every loaf of bread goes to the deserving.”

This is the abode of Baba Ghulam Shah Badshah, the Pir Panchal saint whose shrine is triggering a major socio-economic shift in the Rajouri district of Kashmir. Born in the area now falling in Pakistan, there is not much well researched written material available about the saint, barring some details about his migration to the spot where he meditated for a long time and finally identified the spot for his eternal resting place.  Baba was running a community kitchen and preaching the faith of Islam. It was one particular event, according to the oral histories related to the shrine and the sage that is believed to have made him famous. Agar Khan, the then ruler of Poonch, rebelled against Ranjit Singh, the king of undivided Punjab, and the latter sent his army after him which included Gulab Singh, a soldier from Jammu.

The saint disliked Khan and he informed Gulab Singh of his whereabouts with a condition that he should go alone to nab him. While Ranjit Singh’s army failed, Gulab succeeded solo which pleased the Lahore durbar. Gulab became a Jagirdar and eventually purchased Kashmir.  It is believed that Baba predicted the rise of Gulab and once that happened, he gave the entire Jaghir to the shrine.

The entire region of Rajouri and Poonch has always respected the shrine but it was very recently that the shrine was institutionalized to a level that it is prompting positive changes in the Pir Panchal belt’s socio-economic landscape. There is no army to manage it all – only 40 full-timers who cost the shrine less than half a crore a year.

“It is a huge operation almost on daily basis,” says Faqir Mohammad. “On an average, we get a daily visitor load of two to three thousand people. But on Thursday, it is too much of crowd – 25 to 30,000 and a section of them stays in the shrine premises for the night,” he says.

The operations inside the kitchen at Shahadra Sharief shrine is an elaborate exercise. Last Thursday, Faqir said, the staff in the kitchen cooked 700 kgs of rice and rolled breads for 300 kgs of floor as devotees consumed 100 kgs of dal and four kilograms of tea leaves. At one point of time, the kitchen would cater to the moneyed with mutton and other non-vegetarian delicacies. But after non-Muslims started coming to the shrine, the kitchen was made completely vegetarian. “It adds to costs as people take some loaves of bread as tabaruk home,” Faqir said. The kitchen is managed by 12 chefs and volunteers who offer their services take the total strength at any given point of time to 28. “We treat the voluntary service as contribution of the individuals.”

Spending is comparatively an easier exercise than earning. At the shrine, the inflow of capital is not always the cash. People come with sheep, poultry birds, goats and sometimes buffaloes as their donation to the shrine. “Last Thursday, we sold livestock worth Rs 97000 and on an average, we get more than Rs 25 lakh a month from the sale of the livestock that people donate,” Faqir said. “We have rates fixed – sheep Rs 120 per live kg and goat is Rs 110.” In certain cases, when there are more buyers of a sheep or goat, we go for open auction and the highest bidder gets it. The shrine management keeps diary of the buyers who seek particular livestock on age, weight or colour basis. “As we get, we inform and it fetches a good sum because people rear them,” Faqir said. The overall income never goes less than three crore rupees a year.

In the last decade, the shrine management has spent around Rs 20 crore on creating different infrastructure in and around the shrine. “We have a set system for constructions. Contractors are issued cement and steel by the Auqaf and they purchase the rest of the material,” Faqir said. “It reduces costs because we have long term contract with cement and steel suppliers.” The shrine management has already acquired 327 kanals of land in the immediate vicinity of the shrine for construction of a huge guest house, a helipad and a yard for the buses. It cost the shrine three crore rupees. In the main Rajouri township, the shrine management is already building a huge Jamia Masjid on 27 kanals of land and the construction alone would cost nearly three crore rupees.

But the major contribution the shrine has made is the formation of Baba Ghulam Shah Badshah University. “We gave a one time grant of Rs 33 crore and every year we pay Rs 2 crore,” Faqir said. “There are set dates. We pay Rs 50 lakhs on the turn of every quarter and there is no failure.” At one point of time, the shrine management was facing liquidity crunch. “We did not want the university to suffer. So we raised Rs 1.60 crore of qarz-e-hasana from Jammu Auqaf and thank God, we have paid it back. Now we owe only Rs 52 lakh to them,” added Faqir. Qarz-e-Hasna is an interest free debt.

Initially, the university was managing itself with the money that the Shahadra Sharief shrine would pay. Now, it raises more money from other sources. But that does not make shrine management to renege from what it has committed to.

“Right now, we own infrastructure that is worth Rs 60 crore,” says BGSB University Registrar, Mohammad Rashid Choudhary. “We invested only Rs 40 crore but the rates at which we raised the infrastructure was modest – Rs 1200 per sq feet, compared to Rs 2000 which the government has spent on building colleges.” Rashid smiles to share the growth story of the university campus. “A goodwill school was started in our neighborhood with an investment of Rs 16 crores when we got only Rs 15 crore to start the university.” And it worked.

Now the funds are flowing from all directions as the BGSB University is accredited with the UGC. “For the last two consecutive years, the UGC gave us Rs 7 crore each year,” Choudhary said. “We expect more than Rs 20 crore in next three years from UGC alone.” The state government is also chipping in. It gave the university Rs 8 crore last year and Rs 5 crore this year. The university management says that for a university that has Rs 12 crore committed revenue expenditure, it is peanuts.

The Vice Chancellor of BGSB University, Prof Irshad Ahmad Hamal said that within such a short time, a beautiful campus coming up is indeed commendable. The university teaches 14 courses including seven post-graduate courses and most of the university is residential. “We have lot of MNCs and corporates coming to the campus for identifying the human resource,” Hamal said. “We are open to teaching the best and the newest.”

The University has a set system of admissions – 33 percent each goes to open merit, the reservations for the Pir Panchal region and self financing education.  Every two semesters which makes an academic year, points out Choudhary, the university gets an average Rs 10 crore as capitation fee. Last year the overall intake of the University was 1800 that was increased to 2000 for the ongoing academic session.

And the most interesting part of the larger reality is that it is literally a Kashmir dominated campus. Choudhary said Kashmiris make 55 percent of the overall intake of the students enrolled with 45 percent of the faculty from the valley.

Before leaving the shrine, Faqir revealed a much larger reality while sipping nun-chai, a traditional salted Kashmiri tea. “The Mughal road is changing the region. Now, a lot of Kashmiris come here to pay their respects at the shrine,” Faqir said. “But they do not donate anything. Not because they do not want to donate. They ignore the safe and are looking for mujawirs so that they could drop the cash in their pockets. It is a habit and it will not change.” Faqir said it sickens him when at Kashmir shrines, he sees mujawirs concealing the shrine safe and literally begging for alms.