As the arrival of more than a million tourists to Kashmir this year created a record of sorts, Kashmir Life examines the major failures that reduced the benefits by way of jobs and turnover and limited capacities of the hospitality sector. 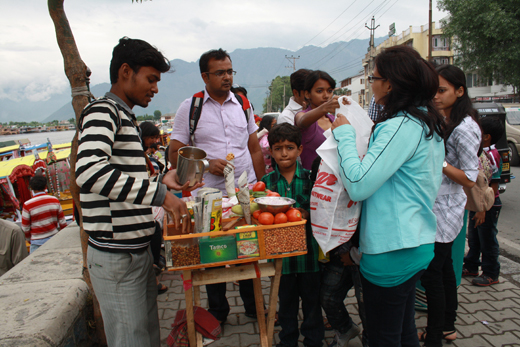 It has been the most happening year in the history of tourism in Kashmir. There were instances in which visitors drove to Srinagar but failed to have a shelter and spent the nights in buses. Hotels reported 100 percent occupancy for three months and even at the peak of Amarnath pilgrimage rush, the general tourists would fill around 70 percent occupancy in Srinagar.

For the first time, Srinagar airport received as many as 29 flights a day and the fair structure reached a level that it was out of reach for commoners especially those who need to travel for medical purposes. The introduction Kashmir as a wedding destination was a major event. Two wealthy families from Delhi and UP flew their guests in charters to Srinagar and solemnised the marriage here. For almost a week both the functional 5-stars hotels in Srinagar were fully booked, so was the SKICC.

“I am told, another major destination wedding is taking place by the end of this year,” said Dr Amit Wanchoo, who was responsible for the first such wedding in June. “It is a newer concept that could add to our profile.”

Everybody associated with tourism in Kashmir made a good earning. These include the state institutions as well. Getting a ticket for Gondola cable car in Gulmarg, for instance, is an on-line affair now. Long lines outside the Gandola gates through the day suggested the machines are making the best of the season. This could be true with all the gardens around Srinagar. The government remained sensitive to the sector’s requirements because better arrivals meant good publicity and better yield. But there were five major failures that the sector should look to addressing the next season.

Leasing Luxury
In 2011, when the hospitality sector across India gauged the mood of the Indian traveler with Kashmir at the top priority, big players also started showing sudden interest in Kashmir. Major travel agents wanted a lot of accommodation on rent for the entire season. The local market that had barely come out of three disturbed summers in 2008, 2009 and 2010 was willing to give its property to anybody who could pay in advance and run it at no costs to the owners. A number of hotels – some of them with good brand names, agreed and the deals were struck in March and April 2011. The deals fetched them cash in advance but kicked them off the track for the season. It was the lease-holder doing the bidding and making most of it.

In 2012 it was expected the trade would do away with the practice but it did not. “The trend exists,” says Imtiaz Ahmad of the Residency Hotel. “Most of the properties that are off track and lack adequate branding do enter into such deals but I doubt any hotel with a brand has marketed itself.” Usually, Imtiaz says, these are low budget addresses that help the travel agent save much.
Bilal Ahmad owns a couple of hotels. In one case, he says, “we had leased the property for the entire season simply because we were unsure of the situation. “But this year we are running it ourselves.”

“There are people who still continue with this system because it hedges the risk and fetches them cash in one go that they might be investing in other businesses.”

Azim Tuman, who heads the houseboat owners association, said the trend is a crisis and is gradually taking the tourist activity to places like Nowgam and in certain areas of the old city. “Nobody in the houseboats is doing this, be sure, we will not change,” he asserted.

This practice impacts brand-Kashmir much more than liquidity loss. “We are increasingly sending dissatisfied visitors back home which is not a good omen for the market,” a major travel agent with nearly four decades of experience said. “The ‘brand-Kashmir’ belongs to us and not to the person who hires a hotel so the brand impacts as he earns.”

Imported Professionalism
Kashmir might have a very long history of being in the hospitality sector, but the reality is that it gets more than half of its workforce from outside to man the show. The reasons are many. Imtiaz says, he has seventy percent non local staff because professionals are not locally available. “They would break the crockery that would cost much more than their wages,” Imitiaz said, “The brief training course they have at the local hotel management institute is too inadequate to train them how to serve.” For Imtiaz, it is not only how fast the servicemen would respond to a customer who is seeking breakfast before laving for the airport. 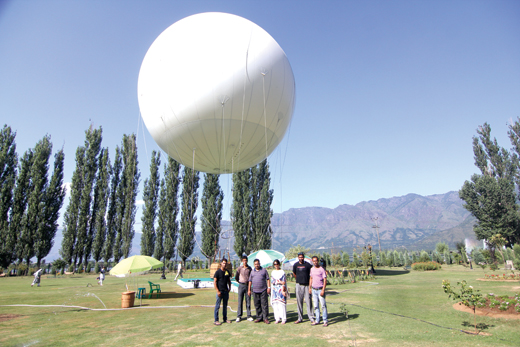 “It is how you change the ashtray in his room while he is smoking or how coolly you are able to communicate that this dish may take some time,” he says. “After all the guest seeks a definite mannerism for what he pays for staying in a room.” But that is not the only factor. Right now most of the hotel kitchens are stuffed with non-local cooks. Not because they work on less wages, but simply because they know how to cook. Almost two-third of the tourist arrivals are from the Indian plains, mostly Maharashtra and Gujarat and ninety percent of them are vegetarians.

“I would have been happy to hire locals but they do not know the art of vegetarian cuisine,” says G M Dug who runs two hotels in Srinagar. “Kashmiri chefs know only Wazwaan and for them the most difficult preparation is the vegetarian one and in certain cases some of the vegetarian chefs even use mutton stock in it which sometimes could be a crisis.”

Many tourists do not actually trust their travel agents on food. So they get the food and the cooks along. “We do get groups that takeover the kitchen till they leave and it is because of the peculiar vegetarian food habit that they have,” said a hotelier, Azim Mohammad. “This practice is acceptable because this is part of the budget tourist and it happens everywhere.”

A manager of a five star hotel said, though they have separate kitchens for veg and non-veg and do not face a problem as the sector might be facing, they also hire around 40 percent of their tariff from outside. “For us budget is not an issue, the talent and availability is,” the manager, who is not authorised to speak to media, said. “One of the five stars could trace a good chef and he is there but you cannot run a five star with one chef.” For a place with high unemployment rates, this trend could create a crisis if the policymakers do not intervene and get better training systems takeover the market.

Driving Directly
This has been a major demand of the local transport sector. If tourists are driving in huge commercial buses, the trade argues, they should either pay to move places within the state – as is happening in other states or simply permit the local transport sector to takeover. “I have been busy all these months,” Ahfaq Ahmad, an auto driver from Gojwara who works around Dalgate area said.

“Given the rush I thought I would purchase another auto but that I could not.” Most taxi drivers also remained busy with the tourists this season. But the tourists they catered to were the ones whot had flown in and not those who drove up in their own vehicles. 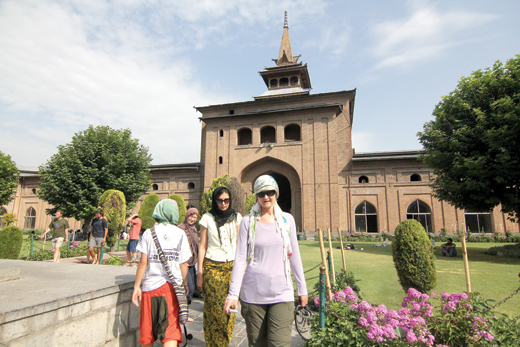 Insiders of the tourist trade say, if the government does not work to let the benefit trickle down to the transport sector, it should not permit the inter-state movement of commercial traffic free. It has many problems, explains Ghulam Mohammad, an experienced transporter. The revenue that could have come by levying certain duties could help improve the municipal affairs. “Offering everything free is impacting the brand because it gives an impression of cheap destination which might be beneficial to swell the backpacker numbers but prevents the high-spending tourist from coming in,” believes Ghulam Mohammad.

Officials argue that offering such concessions were important because it helps in revival of the sector. Once it stabilises, they say, the normal systems and levies will take over. Interestingly, in Leh, for instance, no tourist can drive in his own vehicle.

Uneven Dispersal
For ages, Mughal gardens, Gulmarg and Pahalgam were the main bread and butter for Kashmir tourism. During the last few years, a lot of public investment has gone into various other areas that offer alternatives. Some basic infrastructure is available at these newer spots like Yousmarg, Dudhpathri, and southern spots of Kokernag, Verinag, Achabal and Ahrabal. But what was obvious in the tourist priorities was that they could not come out of the Gulmarg-Pahalgam-Sonamarg-Srinagar circuit. This led to massive overcrowding of all these places as they were overflowing their carrying capacity. Policy makers in the government should have sanitised the travel trade and suggested them to include the new destinations in the ternary of the visitors but it could not happen this year.

While the trade is focused on the arrivals, interestingly, it is not taking into account the local tourist who has money and is spending. It was the local tourist who sustained Gulmarg and Pahalgam at the peak of militancy when Kashmir was not a destination either for foreign or domestic tourist. It is this tourist that is now finding solace either on Mughal road or on Simthan top on the road between Islamabad and Kishtwar. Last week, this tourist was responsible for the six hour long traffic jam between Vail and Daksum and later in Pahalgam as well when some of the people failed to enter the town till 2 am in the night and returned home. While the policy makers are planning for future, they must keep in mind this element of the travelling class within Kashmir which spends more than the average backpacker.

Over To Amritsar
This loss has been colossal. Trade insiders suggest that almost two-third of the handicrafts that tourists purchased in Kashmir were the machine-made products from Punjab, mostly Amritsar. These included shawls, stoles and even machine-made carpets that come from China. “Most of these items would be thrown away by the user after they come to know that it is not a Kashmir product,” said Abdul Hamid Punjabi, president Kashmir Chamber of Commerce and Industry. “Immediately, we suffer three losses. Firstly, the Kashmir brand is hit which is a long-term loss. Secondly, our artisan is getting discouraged when he sees the machine has taken over and finally it is loss of a lot of money.”

The government handicrafts department has been making noises on this front but trade insiders say not much has changed. Many are suggesting that selling machine-made Amratsari material to tourists in Kashmir should be banned by law, which will actually discourage the fake handicrafts being sold in the name of Kashmir. Is anybody listening?