Kashmir is gradually emerging a crucible of climatic change. As the Western Disturbances loaded with a lot of pollution reach Kashmir, it gets into some complex process overhead and blasts in cloudbursts, a frequent occurrence now. One cloudburst almost decimated a remote Dacchan village killing more than 25 residents, reports Saifullah Bashir

Kashmir’s weather situation seemingly has an auto-cut. As the soaring mercury reaches a point, it rains. Off late, however, these rains in peak summer, mostly in July and August, witness a lot of cloudbursts.

These cloudbursts routinely take their toll. But this summer, one cloudburst resulted in a huge tragedy in Honzer, a hamlet concealed within inaccessible mountains of remote Dacchan. As the rains wiped out part of the village, the residents laid to rest seven of their members and 19 missing persons are now presumed dead.

While the government and the volunteers are working overtime to help the villagers rehabilitate, there is a debate within the society about the cloudbursts that have started visiting Kashmir more often. Cloudbursts leave tons of soil and silt and a lot of destruction behind.

Cloudburst, experts said is a natural phenomenon involving very heavy rainfall taking place for a brief duration of time in a small area. These are common in mountain areas due to the warm air currents of a thunderstorm that tend to follow the upward slope of a mountain. Experts say that unexpected precipitation exceeding 100mm/h over a geographical region of approximately 20-30 square km is what causes a cloudburst.

“It gets formed in a very short duration,” Dr Shakeel Romshoo, head of Earth Sciences at the University of Kashmir, said. “A hot cloud collides with a cold cloud and abruptly a cloudburst took place and tons of water fell down together. It hardly remains for 10 minutes.”

Cloudburst occurs when moisture-rich air travels up a mountainous region, forming a vertical column of clouds known as Cumulonimbus clouds. These clouds usually cause rain, thunder and lightning. Technically, the upward movement of clouds is also known as Orographic lift. Due to these unstable clouds, heavy rainfall may occur over a small area.

The upward movement of clouds provides the required energy for a cloudburst. It usually happens at 1,000-2,500 meters above sea level. The moisture is usually provided by low-level eastern winds associated with a low-pressure system over the Gangetic plains.

The experts have been studying the frequency of these weather conditions since 2017. They have actually collected a lot of data and it shows the seriousness of this natural disaster.

Along with cloudbursts, in the last around five years, as many as 30 incidents of lightning, flash floods, hailstorms, windstorms, gusty winds, landslides and heavy rains have occurred in different areas of Kashmir.

June, July and August witness most of the cloudbursts. There were 18 incidents since 2017.

Data compiled by the Meteorological Department (MeT) suggests that 18 people have also died and eight were injured in these incidents besides about 100 cattle heads were washed away.

On July 18, 2017, dozens of houses were damaged and crops, roads, trees were washed away by flash water after the cloudburst in Nagbal (Tral). 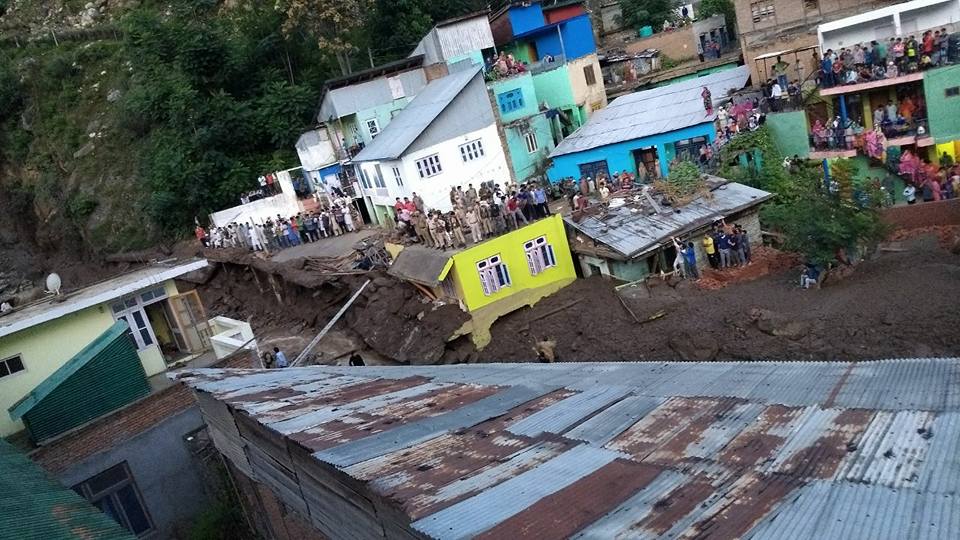 On July 20, 2017, six persons including four of a family died and 11 others were injured after flash floods triggered by cloudbursts wreaked havoc in Thathri (Doda). Six houses, two shops and a school were damaged.

On August 2, 2017, a massive cloud burst caused flash floods in the Khonmoh area damaging more than a hundred units in the Industrial area located on the foothills.

On July 3, 2018, a house was damaged and several hectares of paddy fields were inundated in Naristan and Gutroo villages of Tral. The resultant floodwaters have also washed away a road in nearby Aripal.

On August 14, 2018, a massive cloudburst and ensuing flash floods wreaked havoc in Tangdhar (Kupwara) including the villages of Nacheya, Bagbala, Haji Nard and Gumol causing damage to the market, dozens of houses and shops, roads, power and telephone infrastructure. Two persons were killed in these flash floods.

On June 12, 2019, four persons were injured after a cloud burst hit Naidkhai and Poshwari villages (Bandipora).

On August 3, 2019, a cloudburst damaged a residential house, a school and a road in Hajin (Tral). Water supply and electricity transmission lines were also partially damaged.

On August 9, 2020, amid rains and lightning, a cloudburst occurred in forest area Brenpathri (Tral) causing flash floods in low-lying areas. One person died and four others were injured.

On June 3, 2021, a major cloudburst hit a site in proximity to the house of Manzoor Ahmad Bhat in Sharkoot Tarathpora in Handwara. It caused damage to his house.

On July 12, 2021, a cloud burst occurred in the upper reaches of Lar (Ganderbal), due to which a large amount of water gushed downwards flooding the nallahs and rivulets causing flash floods. It damaged the agriculture fields, trees, roads, drains and irrigation facilities.

On July 28, 2021, at least, nine persons died, nineteen are still missing, and 17survived injured as twenty residential houses and cattle sheds besides other infrastructure was damaged in an area spread over two hundred kanals of land when a cloud burst hit remote Hunzar (Dachhan).

Another cloudburst occurred near the cave shrine of Amarnath leading to shooting stones which caused damage to some tents there.

On July 28, 2021, a cloudburst triggered flash floods in Aloosa (Bandipora) resulting in partial damage to a house, a mosque and a footbridge was washed away. The same day, a cloudburst caused damage to the hydropower project in Kargil.

A cloudburst leads to the fall of tons of water from the skies and has the ability to wash away everything which comes in its way.

“Water dropped in a normal cloudburst is equal to the rainfall of the whole year. A cloudburst can wash away a mountain, if fragile,” Romshoo said.

Fear of the residents apart, the increasing frequency of these weather incidents also indicate a sharp climatic change.

Jammu and Kashmir which is surrounded by the Himalayan range was witnessing this phenomenon in the past but that used to go unnoticed.

Earlier, not many people knew what is happening in the mountains. Now the social media and the internet help people to witness, record and observe these weather incidents.

Ramshoo said that international journals and organisations related to weather systems have found an increase in these incidents amid global climate change.

“This is not a new thing in Jammu and Kashmir. This has been happening on and off. Unfortunately, we do not have a good network of observations and data to say that the frequency of this event has increased or decreased,” Romshoo said. “If there would not have been the internet, we may not have known about the Kishtwar incident.”

Cloudburst, being a global phenomenon, nobody has any control over it. While the experts can predict rain or snow, there is no mechanism available that they can predict a cloudburst.

“Normally this phenomenon takes place within Kashmir and we need a dense network of droplet radars and if it is done, we can have better predictions in future,” Romshoo said.

To detect cloudburst, specialised radar and Doppler weather radars are required. Though the MeT department is monitoring the weather through surface radars and satellite systems, cloudburst is a quick event in which advanced equipment is required.

Director of Meteorology, Sonum Lotus said that “in the absence of a monitoring system is it difficult to say whether a cloudburst has happened or it is just a flash flood due to heavy rainfall”.

In Kashmir, the MeT has installed a Doppler weather radar in 2015. One such radar is also installed in Jammu to monitor the chances of heavy rainfall.

“Technology keeps upgrading. Types of equipment keep changing and the same is the case with the weather system,” Lotus said

Lotus said that favourable conditions for cloudbursts take place in just a few hours, which makes it very difficult to predict.

“Every life is precious and I feel sorry for every death. But I am happy to tell you that with our weather advisories and warnings, several lives have been saved and people have become weather conscious,” Lotus said.

Lotus further said “it is important that together we have to be aware of people, especially the nomadic people, who are less connected with communication. We need to educate and empower them regarding weather.”

On a long-term basis, the areas from which the winds come will have to reduce the pollution level.

“We have less industrial activity but we face the maximum impact of climate change,” Ramshoo said. “Winds, which we call (Western Disturbances), travel from the Atlantic Ocean, Europe and then to West Asia. They bring along with them all the pollution from these places and finally reached here and we get rains.” All countries need to reduce the level of pollution and then only can Kashmir expect some relief.

On a long term basis, the experts admit they will have to create an atlas about the areas which are prone to cloudbursts. This needs a lot of data on a long-term basis.

Once that is done, the experts say they will be in a position to warm people from constructing their homes in those areas.

“People are indiscriminate, without consideration of the environment, building residential houses,” Ramshoo said. “There has to be some land-use policy. Infrastructure development should be environmentally friendly so that there can be minimum loss of life and property.” 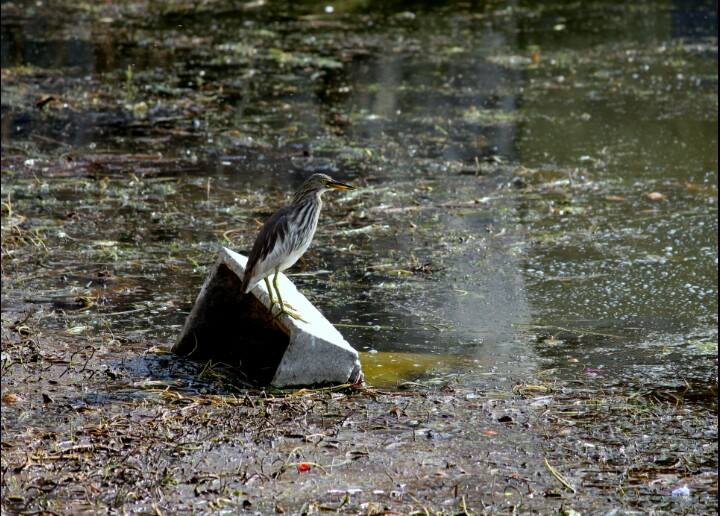