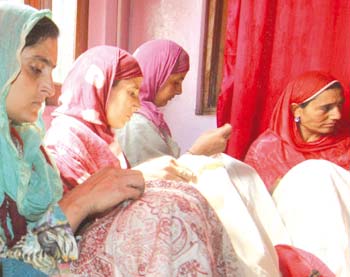 Every year, the world commemorates the victims of Haymarket affair that took place on Tuesday, May 4, 1886, at Haymarket Square in Chicago, by observing May 1, as International Workers’ Day in their memory. In Canada and the US, however, September 1, is chosen as Workers’ Day.

On that fateful day, the workers had gathered peacefully to demonstrate and advocate for better working conditions. But, how many in the world know that the Haymarket affair was not the first labour agitation against the exploitation of the working class in the labour history of the world.

Setting the records correct, it was precisely April 29, 1865, when Kashmir’s weavers, locally known as Shawl Baufs, had hit the streets of Srinagar in protest against the high taxes that were levied upon them by the Dogra despots.

Under the Dogra rulers ‘system of taxation’, the barest margin of subsistence was allowed to the Muslim Kashmiri workers. The production of silk, saffron, paper, tobacco, wine and salt was a State monopoly. An ad valorem duty of 85% was levied on all woollen manufacture.

Under these pitiable working conditions, the shawl weaver could, thus, hardly earn 7 or 8 chilki rupees per month, out of which he had to pay five chilkies as tax and had to live on remaining 2 or 3 chilkies, by buying singara (water chestnuts) for feeding his family.

The shawl weavers were allowed neither to leave Kashmir nor change their employment so that they were nearly in the position of slaves. There was fear with the Dogra ruler that migration by the weavers to other State would “reduce his revenue.”

But, still, thousands of shawl weavers, escaping cruel clutches of Dogra monarch’s frontier guards, had made their way to British Indian Punjab. The weavers worked under the supervision of a most notorious taxation department of the Dogra rulers which was called Dagshalli who would arbitrarily collect exorbitant taxes for the tyrant ruler and regulate their work with factory owner or proprietor.

In case, a weaver left the work, the Dagshalli through the Dogra soldiers would bring his wife, children and parents and imprison them for the weaver’s escape.

The Dagshalli department was purchased by a wealthy Kashmiri Pandit, Raj Kak Dhar, under a contract with the Dogra ruler for Rs 20 lakhs. This had left Raj Kak Dhar entirely free to realise this amount through arbitrarily fixed tax rates of the ruler by employing the brute force of Dogra soldiers.

The weavers on that fateful day of April 29, 1865, peacefully took out a procession that marched to the ground [maidan] of Zadagar, Srinagar, protesting against such back-breaking taxation, nominal wages, miserable working conditions and ban on migrating to the neighbouring State of Punjab for comparatively better wages.

Raj Kak Dhar unnerved by the protest of the impoverished unarmed weavers misinformed Diwan of Dogra administration who immediately dispatched Dogra Army under the command of Colonel Bije Singh who pushed the unarmed hungry multitude towards the narrow Haji Pather Bridge and in the stampede 28 poor weavers were drowned in the stream and scores injured.

Next day the dead bodies were recovered from the stream and with a declared intention to seek justice from the tyrant ruler, the corpses were paraded by the weavers and other Kashmiris on the streets of the city. They took out a procession which was stopped by the Dogra army. They were not permitted to meet the despot.

Soon, the organizers of the procession were arrested, tortured, jailed and even flogged. Among those incarcerated in Bahu Fort jail was Rasool Sheikh of Tanki Kadal, Ali Paul, Abdul Qadus alias Qudoo Lala and Sona Shah who died due to the torture.

In the history of the Kashmir liberation struggle, these unsung heroes of Kashmir are remembered as First Martyrs.

Despite being the first martyrs in the history of labour struggle of the world, they seem to have been forgotten by the organised labour movement. The reason could be that the event did not take place in Europe or in America. While the world has conveniently forgotten modern history’s biggest landmark, Kashmir should not follow the suit.

(The author is an AVP in J&K Bank)